"Seattle metropolitan mag: does susan hutchison have the temperament for public office?" 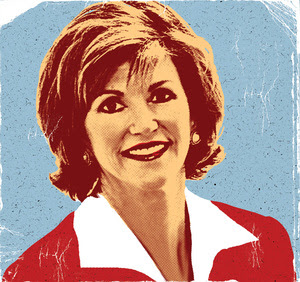 Hot on the the line was Susan Hutchison,“From your questions, I believe you’re trying to hurt me!”

She's the Republican former teevee anchor and leading candidate for King County executive. It was a day after we interviewed her for a piece (Desperately Seeking Susan) in the new (August) Seattle Metropolitan magazine.

Hutchison, 55, looks good on paper and great in front of a mirror or a teevee camera, but substantively, and temperamentally, we found her, er, wanting. She couldn't answer policy questions, and wouldn't answer fundamental political questions, like "where do you stand on a woman's right to choose," or "who did you vote for president in 2008?"

She got visibly angry with some of our questions during the interview (the aforementioned on abortion being one) and called us at home later to clarify and reframe answers. She could be bat-her-big-eyes charming but also bristly, brittle, and defensive.

Because it was for a magazine, not a newspaper, she scolded us like an ex-girlfriend. “I thought you were going to be different!” she cried.

We talked to her in June, but space in the coffee table print magazine wouldn't allow for much of the interview. We'll be posting more, much more if she makes the November ballot (as widely expected) in the upcoming (Aug. 18) primary.

The Hutchison campaign has been able to control her media fairly well, to date. It's been a stream of press releases, and meet & greets- She's not been confronted with hard policy questions or real debate about the very knotty problems the County faces. She didn't return the questionnaire from the moving and shaking Downtown Seattle Association, certainly a potential ally for the conservative candidate.

She's made a mistake, though in alienating the local media: even the Seattle Times, a potential friend indeed, has had to fight tooth and nail for info and access.

Control slipped majorly Friday when court documents unsealed after action by the Times and others revealed that Hutchison lied to KIROTV bosses about being sick, then was spotted in Oregon on a canoe trip. She was fired a short time later after she had badmouthed the station's moral climate to the mother of a prospective intern, and confronted the station's general manager about his allegedly inappropriate relationship with an intern.

Posted by Howard Martin at 6:27 AM

Hey, you have a great blog here! I'm definitely going to bookmark you! Increasing your web traffic and page views Add, add your website in
www.directory.itsolusenz.com/ site, it's pretty awesome too!