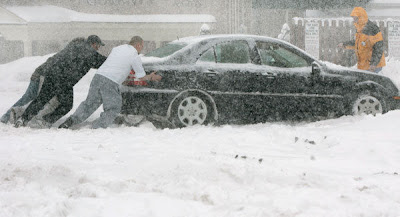 A Democratic Congress, unwilling or unable to approve a $25 billion bailout for Detroit's Big Three, appears ready to punt the automakers' fate to a lame-duck Republican president. Caught in the middle of a who-blinks-first standoff are legions of manufacturing firms and auto dealers — and millions of Americans' jobs — after Senate Democrats canceled a showdown vote that had been expected Thursday. President George W. Bush has "no appetite" to act on his own.
U.S. auto companies employ nearly a quarter-million workers, and more than 730,000 other people have jobs producing the materials and parts that go into cars. About 1 million on top of that work in dealerships nationwide. If just one of the auto giants were to go belly up, some estimates put U.S. job losses next year as high as 2.5 million.

"If GM is telling us the truth, they go into bankruptcy and you see a cascade like you have never seen," said Sen. George V. Voinovich, R-Ohio, who was working on one rescue plan Wednesday. "If people want to go home and not do anything, I think that they're going to have that on their hands."

The automakers — hobbled by lackluster sales and choked credit — are burning through money at an alarming and accelerating rate: about $18 billion in the last quarter alone. General Motors Corp. has said it could collapse within weeks, and there are indications that Chrysler LLC might not be far behind. Ford Motor Co. has said it could get through the end of 2008, but it's unclear how much longer.

For now, however, with the federal emergency loan plan stalled in the Senate, lawmakers in both parties are engaged in a high-stakes game of chicken, positioning themselves to blame each other for the failure.

It's really up to Bush's team to act, he said.

"I don't believe we need the legislation," Reid said. Treasury Secretary Henry Paulson can tap the financial industry bailout money to help auto companies, Reid said, but "he just doesn't want to do it."

Not our responsibility, countered the White House.

"If Congress leaves for a two-month vacation without having addressed this important issue ... then the Congress will bear responsibility for anything that happens in the next couple of months during their long vacation," said Dana Perino, the White House press secretary.

She said there was "no appetite" in the administration for using the financial industry bailout money to help auto companies.

The White House and congressional Republicans instead called on Democrats to sign on to a GOP plan to divert a $25 billion loan program created by Congress in September — designed to help the companies develop more fuel-efficient vehicles — to meet the auto giants' immediate financial needs.

Voinovich and Sen. Kit Bond, R-Mo., along with Democratic Sen. Carl Levin of Michigan, were at work on that measure Wednesday, trying to placate skeptical Democrats by including a guarantee that the fuel-efficiency loan fund would ultimately be replenished.

"It is the only proposal now being considered that has a chance of actually becoming law," said Republican leader Mitch McConnell of Kentucky.

If an acceptable deal emerges, Reid said it could be passed as part of a measure to extend jobless aid to unemployed workers whose benefits have run out. A vote on that bill is likely on Thursday. Negotiators were discussing a scaled-down aid package of $5 billion to $8 billion to help the automakers survive through year's end.

But there was little sign that Democratic leaders would go along.

"We have to face reality," Reid said.

They are vehemently opposed to letting the car companies tap the fuel-efficiency money — set aside to help switch to vehicles that burn less gasoline — for short-term cash-flow needs.

All of which leaves the Big Three bracing for a bleak winter without government help.

GM CEO Rick Wagoner told a House committee Wednesday that the downfall of his industry would ripple through communities around the nation. Pressed by lawmakers, Wagoner wouldn't say precisely when GM would run out of money without a government lifeline, but he disclosed that the company now was burning through $5 billion a month.

Still, with the $25 billion emergency package, "we think we have a good shot to make it through this," Wagoner said.

Many lawmakers in both parties are now openly discussing whether bankruptcy might be a better option for auto firms they regard as lumbering industrial dinosaurs that have done too little to adjust their products and work forces for the 21st century.

The carmakers argue that bankruptcy would devastate their companies, but proponents say it would give them a chance to reorganize and emerge stronger and more competitive.

It's unclear, though, whether Democrats controlling Congress are willing to risk being blamed for letting one of the Big Three — symbols of the nation's once-mighty manufacturing sector — go under.

Bailout-shy lawmakers got an earful from jittery constituents last month when the House let an early version of the Wall Street rescue fail, sending the Dow Jones industrials tumbling and erasing more than a trillion dollars in retirement savings and other investments. Congress took a deep breath and reconsidered, passing the plan a few days later.

Faced with a similar collapse in the auto industry, the Bush administration might yet decide to step in to help the auto companies, or the Federal Reserve could step in — though both have steadfastly refused to do so.
If not, lawmakers have left themselves a contingency plan: Come back to Washington in December for yet another postelection session where they might be able to strike the deal that now seems beyond reach.

"That is available," Hoyer said this week. "The year has not ended."

Howie P.S.: Maybe Holy Joe can get reach across the aisle and pull out those fire hoses (see below). No..wait a minute Joe. Forget the hoses, we need shovels and sand, stat!!
Posted by Howard Martin at 6:43 PM