UPDATE: A more chilling version that injects the violence factor in The Independent (UK) story, "White rage: The rednecks out to kill Obama." 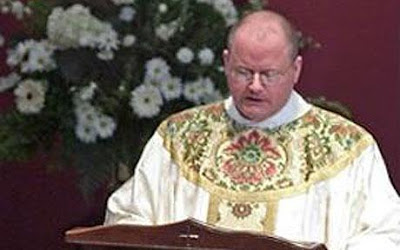 Rev. Jay Scott Newman of St Mary's Catholic Church, Greenville, wrote to parishioners telling them they must do penance if they voted for Barack Obama

Barack Obama's election may have been met with celebrations around the world, but for some Americans his honeymoon is over before he has even taken office. Disgruntled conservatives are making plans to oppose his every move over the next four years, and - patricularly in some parts of the South - emotions are running high, sometimes spilling over into outright hostility.
Any hope that partisan rancour might ease after Mr Obama's historic election victory have been rapidly dispelled - not least in Georgia, where a bitter new Senate election battle is under way. Elsewhere, wrangles over continuing knife-edge Senate recounts in Minnesota and Alaska have ensured that the divisions in the run-up to the election persist.

Under Georgia law, a senator must win at least 50 per cent of the vote, but a third party candidate prevented Saxby Chambliss, the Republican incumbent, from doing so on election day and forced a run-off vote.

Republicans have begun running advertisements urging voters to back Senator Chambliss in the run-off vote against his Democrat opponent Jim Martin on Dec 2, warning that a Democratic victory could hand Mr Obama a filibuster-proof majority in the Senate, giving his party almost unfettered power.

With emotions running high, Republican Congressman Paul Brown denounced Mr Obama as a Marxist, and compared his plans for a national service corps - to help out in natural disasters - to the formation of the Nazi brownshirts.

"That's exactly what Hitler did in Nazi Germany," he said. "We can't be lulled into complacency... Adolf Hitler was elected in a democratic Germany. I'm not comparing Barack Obama to Adolf Hitler, what I'm saying is there is the potential of going down that road."

Conservative displeasure at the president-elect is not confined to Georgia. A Roman Catholic priest in South Carolina told his parishioners not to seek Holy Communion if they voted for Mr Obama, because supporting him "constitutes material cooperation with intrinsic evil" as the President-elect backs abortion rights.

The Rev. Jay Scott Newman of St Mary's Catholic Church, Greenville, sent parishioners a letter telling them that they must first do penance for their vote.

"Our nation has chosen for its chief executive the most radical pro-abortion politician ever to serve in the United States Senate or to run for president," he wrote, referring to Mr Obama by his full name, including his middle name of Hussein.

In Madison County, Idaho, a firmly Republican state, the schools superintendent was obliged to remind teachers and bus drivers that pupils must show proper respect for elected officials, after parents complained that children on one school bus were chanting, "Assassinate Obama!"

In some places, tensions over race appear to be a factor. In North Carolina, a southern state Mr Obama won on election day, the Statesville Record newspaper had to apologise after running a leader column which asked: "What's more scary, a bleak economy or a black president?"

Analysis of the election results by the New York Times produced a revealing map, which showed that across large areas of the south, particularly in Arkansas, Tennessee, Alabama and Mississippi, the national swing to the Democrats was actually reversed.

In contrast to the rest of the US, Republicans made big gains in counties that were disproportionately white and poor. Fewer than one in three southern whites voted for Mr Obama, compared with 43 per cent of whites nationwide.

Mark Potok, director of the Southern Poverty Law Center, which monitors racial violence, said: "I think the very idea of a black man being elected to the White House is shocking to some subset of the American white population."

But many more conservatives are worried by Mr Obama's policies than by the colour of his skin. In Huntertown, Indiana, financial planner Jeffrey Smith, 42, flew the Stars and Stripes upside down at half mast, in protest at Mr Obama's support for a plan to give more balanced broadcast reporting of differing views - seen by many as a tool to muzzle right-wing talk radio. He was also fearful of tighter restrictions on gun ownership.

"Ships fly their flags upside down when they're sinking, and I see that happening to our country," he said.

Many on talk radio shows agree. Sean Hannity, of Fox News radio, who led condemnations of Mr Obama's links with the 1960s terrorist Bill Ayers, has placed on his website a countdown clock, ticking down to the next election when he hopes to be rid of "the radical Barack Obama".

Rush Limbaugh, the doyen of conservative talk radio hosts, last week blamed Mr Obama for continuing stock market falls: "This is an Obama recession, might turn into a depression," he said. "He hasn't done anything yet, but his ideas are killing the economy."

Concern at what Mr Obama's policies might bring has also sparked a 40 per cent rise in gun sales, from those worried that he will revive a lapsed ban on assault weapons.

Mark Greene, a hunter and member of Gun Owners for Senator Obama, told Mr Obama's hometown newspaper, the Chicago Tribune, that some believe his election will create civil unrest in the US.

"There's a small contingent of folks... concerned that Obama's election is such a revolutionary change that it could portend mayhem. It's hysteria," he said.

But while gun fans can do something practical, other conservatives are left with only despair to get them through the next four years.

John Derbyshire, a columnist with the conservative magazine National Review, dismissed Mr Obama as a "shallow, ignorant, self-obsessed man" and mocked those conservatives "scratching around for shards of optimism - of Hope! - in the general wreckage".

He said: "I see nothing for conservatives to hope for in an Obama administration. We just have to stick it out."

At Focus on the Family, a socially conservative group opposed to abortion and gay marriage, there was defiance. In an email to supporters, senior vice president Tom Minnery invoked the spirit of the Blitz. "In the most desperate days of World War II – when Great Britain was being pounded daily by Hitler's Luftwaffe –Winston Churchill called on his countrymen not to despair from danger but to rise to the challenge," he wrote.

Democrats are both bemused and amused by the primal scream from the right. Hilary Rosen, a former supporter of Hillary Clinton, said: "I think it's going to be very hard to reinvent the image of President Obama. This country is on his side. And the Republicans I think are making a mistake by trying to undermine him before he gets started."
Liberal blogger John Lorenz, of opednews.com, complained: "The public has spoken. These reactionaries can't just simply shut up, even for a while, and allow the graceful transfer of power."

Barack Obama
Posted by Howard Martin at 6:23 AM