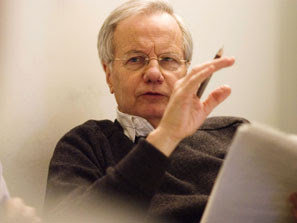 Moyers, whose comments focused on the recent health care debate, said that "too many Democrats have had their spines surgically removed."
Moyers, a White House press secretary during the Johnson administration who went on to win over 30 Emmys and countless other awards during his subsequent journalism career, has been a frequent critic of the Republican Party over the years, making his critique of the Democratic Party on "Real Time" more exceptional.

"The problem is the Democratic Party," said Moyers. "This is a party that has told its progressives — who are the most outspoken champions of health care reform — to sit down and shut up. That's what Rahm Emanuel, in effect, the chief of staff of the White House, told progressives when they stood up as a unit in Congress and said, no public insurance option, no health care reforms."

Moyers said that, over the years, the Democratic Party "has become like the Republican party — deeply influenced by corporate money."

"I think Rahm Emanuel, who is a clever politician, understands that the money for Obama's reelection would come primarily from the health industry, the drug industry and Wall Street, and so he is a corporate Democrat who is destined, determined that there would be something in this legislation — if we get it — that will turn off those powerful interests."

Moyers had some advice for President Barack Obama, as well.

"There's a fear that Barack Obama will become the Grover Cleveland of this era," said Moyers. Grover Cleveland was a good man, but he became a conservative Democratic president because he didn't fight the interests. ... I would much rather see Barack Obama be Theodore Roosevelt. Theodore Roosevelt loved to fight. He came into office and railed against the malefactors of great wealth, and he was glad to take them on. ...

"I think if Obama fought, instead of finessed so much, he stood up and declared for what is really the right thing to do and what is really needed instead of negotiating the corners away, instead of talking about bending the curve, and talking about actuarial rates, if he were to stand up and say, 'We need this because we're a decent country', I think it would change the atmosphere."

Moyers said that conservatives have dominated the debate over health care lately. "In the last few weeks, the right wing has been winning the debate. How [Obama] lost control of the narrative, I don't understand. Well, yes, I do. He didn't find the right metaphors, as you were just saying, and he didn't speak in simple powerful moral language. He was speaking like a policy wonk to the world of Washington, not a country of people who are hurting.
"Here's the party that lost and the conservative movement that was discredited over the last eight years .... They're setting the agenda for a Democratic Party that controls the White House, the Senate and the House. Something's wrong in that."

Posted by Howard Martin at 7:01 AM