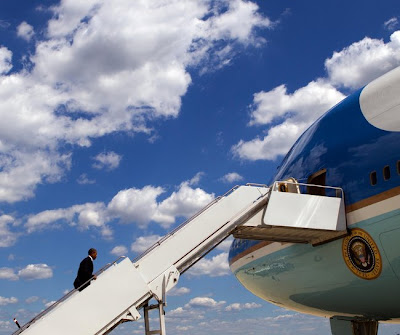 "President Obama heading to Michigan last week, where he visited a factory and urged voters to turn their anger on Republicans."

As the economy worsens, President Obama and his senior aides are considering whether to adopt a more combative approach on economic issues, seeking to highlight substantive differences with Republicans in Congress and on the campaign trail rather than continuing to pursue elusive compromises, advisers to the president say.

Mr. Obama’s senior adviser, David Plouffe, and his chief of staff, William M. Daley, want him to maintain a pragmatic strategy of appealing to independent voters by advocating ideas that can pass Congress, even if they may not have much economic impact. These include free trade agreements and improved patent protections for inventors.

But others, including Gene Sperling, Mr. Obama’s chief economic adviser, say public anger over the debt ceiling debate has weakened Republicans and created an opening for bigger ideas like tax incentives for businesses that hire more workers, according to Congressional Democrats who share that view. Democrats are also pushing the White House to help homeowners facing foreclosure.

Even if the ideas cannot pass Congress, they say, the president would gain a campaign issue by pushing for them. MORE...

Howie P.S.: After 20 articles each month, the paywall goes up.
Posted by Howard Martin at 5:57 PM