"Romney takes a gamble and embraces Donald Trump" (with photo) 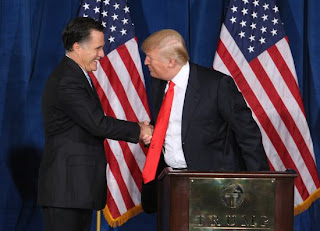 (CLICK ON IMAGE TO ENLARGE)
John Dickerson (Slate via CBSNews):


Mitt Romney and Donald Trump are teaming up for a Las Vegas fundraiser tonight. We've seen this movie before: The straight-laced square goes to Vegas with his outrageous friend and wakes up with a Mike Tyson tattoo, next to a woman who draws a heart over the "i" in her stage name. Romney's general-election strategy has been to allow no distraction from his focus on the economy. Trump's strategy is pure distraction. In neon. Recently he tried to raise --yet another time-- questions about the president's birthplace. Today, Trump put the birthplace question at the center of the election: "@BarackObama is practically begging @MittRomney to disavow the place of birth movement, he is afraid of it and for good reason. He keeps using @SenJohnMcCain as an example, however, @SenJohnMcCain lost the election. Don't let it happen again."  MORE...

Howie P.S.: It appears, to me, that The Donald is pulling Mitt towards him in the photo and Mitt is not going all the way there. H/t to the Field Negro for the photo.
Posted by Howard Martin at 7:32 AM