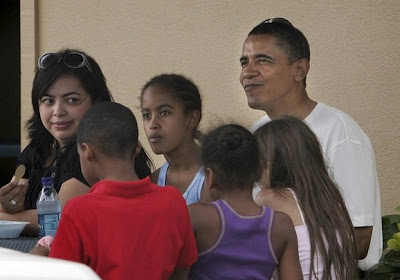 UPDATE: According to yesterday's the pool report, which I just saw:

Correction: an earlier pool report misidentified a woman as Obama'shalf-sister Maya Sortero-Ng. Sortero-Ng was not present today. The woman at the aquatic park and shave ice shop was a nanny named Nubia who flew to Hawaii with the Obamas.

Howie P.S.: I hadn't seen the pool report that misidentified the woman present as half-sister Maya when I took my guess. Nubia kinda looks like Maya, so I think that was the source of the errors. Jed Lewison put this headline on his report of "Waikiki-gate," including this pool report: "Amusing For Its Triviality."

President-elect Barack Obama, daughters Malia and Sasha, and friends at 1:55 p.m. entered the Koko Marina Center in Hawaii Kai near Honolulu for a sandwich and shave ice.

Obama entered Koko Marina Paradise Deli and said, "So, what are we going to get?" "Let me get a tuna sandwich," Obama said, asking for it on 12-grain bread, tomatoes and no mayo.

"Actually, can you melt cheese on that?" he asked. "Can you make like a tuna melt with cheddar cheese?"
Obama then approached the press pool to say hello. He placed his shoulder on this reporter, who was scribbling notes, and said, "You don't really need to write all that down."

Then Obama walked with Sasha, who was wearing a purple, yellow and white dress, to Kokonuts Shave Ice & Snacks. There were dozens of onlookers swarming the crowded parking lot snapping pictures and saying hello. Obama waved and said "Hi, Merry Christmas."

At one point on the sidewalk, Obama dropped his sunglasses, bent down and picked then up.

Obama ate his sandwich before his shave ice, saying he wanted to set a good example for his girls by eating healthy food before dessert.

Inside Kokonuts, Obama, with his BlackBerry on his left hip, ordered shave ice for the kids and friends.

"Everyone, once you've ordered, step back," Obama instructed the kids.

Obama pulled cash out of his wallet and Eric Whitaker pitched in to pay the bill. Obama ordered mixed-berry shave ice for Sam Tubman and offered shave ice to the press pool.

Then Obama, Sasha, Malia and other kids sat at a blue picnic table enjoying their shave ice. He asked the kids, "How is it? Good?"

Michelle Obama is not here.

The group left the Koko Marina Center at 2:25 p.m. After winding along a narrow two-lane highway overlooking the Pacific, they arrived at the Obamas' Kailua vacation home at 3:02 p.m.

Earlier in the day, the group left Sea Life Park about 1:40 p.m. after spending 90 minutes at the marine amusement park.

The press pool was not allowed inside the park. Obama did not pose for pictures or talk to reporters, but reporters could see him, his daughters, and several other family friends leave the park from the interactive dolphin area.

Tourists who were inside showed pool reporters photographs they took of Obama and his family and friends. Obama is wearing a casual cream-colored shirt tucked into olive shorts, and sandals.

The Obamas and friends were seen attending the dolphin show, tourists said.

It is unclear whether the Obamas swam with dolphins, and Obama's clothing did not appear wet.

When they left the park, about 50 park guests, many wearing life vests, stood near the motorcade to see the president-elect.

When he came out, they screamed, "We love you, Obama" and "Obama ohana!" Obama stood and waved at them and smiled.

Obama spokesman Ben LaBolt issued the following statement to the pool: "With no further scheduled events for the day, a (press) lid was called until further notice. The president-elect decided to take the girls to a water park and we assembled the pool as quickly as possible."

The park is nestled along the shoreline in the sparsely populated and scenic Waimanalo area, with soaring volcanic mountains nearby.

Wearing his gray T-shirt and White Sox cap, Obama earlier in the day exited the Semper Fit Center at Marine Corps Base Hawaii in Kailua at 8:58 a.m., according to the White House press pool report.

He spent about two minutes talking with onlookers and shaking hands.

Obama turned to a young boy and said, "Hey man, good to see you. Are you a football player?" The boy nodded. Obama said, "I can tell!"

Obama shook more hands and told the crowd, "You guys have a wonderful new year." The president-elect also said, "Good to see you."

Obama's motorcade returned safely to the Kailua home at 9:09 a.m.
Obama later left his vacation home with daughters Malia and Sasha about 11:45 a.m. on his way to Sea Life Park. His motorcade left without the press pool, the first time he has done so on this Hawaiian vacation.

Howie P.S.: I'm pretty sure that's his half-sister Maya (with the sunglasses pushed up on her hair) in the photo, above. More photos here.