"Choice of Warren reflects Obama's intent to include evangelicals" 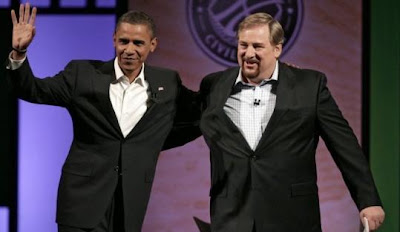 Many of the Obamaphiles streaming into Washington for the inauguration will be looking for one type of president - the dynamic agent of change, ready to end the pain of the Bush years and usher in a liberal reformation. But Barack Obama seems determined to give them another type of president - a figure of national consensus, wise and honorable and able to soar above the political fray.
Obama the candidate showed flashes of both approaches to leadership, and many voters were drawn to the idea that he might be the most liberal president in several generations. But it now seems clear that the vision of Obama as a liberal activist was the product of a handful of impressions that didn't make up a full picture.

The first was his early opposition to the Iraq war, which led both supporters and opponents to believe he was a dove on foreign policy. The second was his racial background, which he advertised as proof of his ability to change the story in Washington, which was true enough but led many to believe he would be a full-throated advocate for groups long excluded from power. The third was his criticism of Bill and Hillary Clinton's politics of "triangulation" - undermining conservative opponents by borrowing some of their positions - which led people to believe he would do no such thing.

All these were honest positions, and he hasn't backed away from them. But they managed to disguise that Obama's policies were no more progressive than Hillary Clinton's - and arguably less so on some issues such as healthcare. Moreover, his message of inclusion, which many liberals chose to read on their own terms - as an endorsement of gay rights and multiculturalism - was also aimed at red-state conservatives, whose religious values he mostly admired.

Now, Obama has nominated a Cabinet of highly familiar figures from a broad range of personal and political backgrounds, which most liberals have found acceptable, if not especially exciting. But his selection of Rick Warren, the evangelical minister and best-selling author of "The Purpose Driven Life," to deliver the invocation at his inauguration has served as a tip-off that Obama may not be exactly the type of change agent that many liberals have been expecting.

Though Warren has millions of followers, he's not especially well known on the national stage, and there is a blurriness about his politics. By some measures - such as his support for Proposition 8, which passed in November and blocked gay marriage in his native California - Warren is a figure of the religious right. But he has a more moderate tone than many evangelicals, and has emphasized some liberal concerns, such as the dangers of global warming, along with his conservative social message.

People who watched the nationally televised presidential forum at Warren's Saddleback Church in August got a hint of what was to come. Warren conducted separate interviews of Obama and John McCain before an audience of church members.

Obama seemed especially eager to win Warren's approval, repeatedly calling him "Pastor Rick" and offering detailed answers to questions about his spiritual views. Obama was also uncharacteristically tongue-tied at times, either because he was trying so hard to sound sincere or because he was straining to win over a skeptical audience.

McCain, by contrast, offered quick, simple answers and won the crowd's approval. Warren, for his part, seemed much more in tune with McCain, despite Obama's entreaties. Nonetheless, it was equally clear, even then, that Obama had identified Warren as someone he wanted to bring into the national discussion.

Inviting Warren to give the inaugural invocation is not necessarily an endorsement of his political views, as some liberals insist. But it is an endorsement of another sort, giving Warren the chance to play the role of national pastor formerly occupied by Billy Graham.

Obama is well aware of Warren's politics and the symbolism of his presence on the inaugural stand, and he is clearly signaling his determination to include evangelicals in his government of national unity.

Obama does not want an administration dedicated to vindicating long-excluded groups, but rather one that shows how those who have been excluded can, once invited inside, become just as mainstream in their skills, credentials, and opinions as any member of the East Coast establishment: He believes the same to be true of evangelicals.
The liberals who oppose Obama's choice of a pastor to offer the inaugural invocation may or may not have misjudged Warren, but it seems clear that they have misjudged Obama.

Howie P.S.: As Obama moves from the candidate seeking supporters to the president seeking a majority to govern, "change" is inevitable. For example, Obama is already facing opposition to his stimulus package from at least one Republican leader, and will be looking for as much support as possible to ensure its passage.

Barack Obama
Posted by Howard Martin at 4:17 AM