How Washington's House members voted on the $700 billion emergency financial rescue package that was defeated Monday:

"I thought long and hard about it, and I know that (House Speaker) Nancy (Pelosi, D-Calif.) and (House Financial Services Committee Chairman) Barney Frank (D-Mass.), who negotiated it, care about the American people in much the same way I do and they got the very best deal they thought they could get. I can tell you 27 reasons why it was not a good package but I think we needed to get started on this issue," McDermott said in an interview with the P-I.

McDermott said the Democrats who voted against the bill shared his concerns about it: that it didn't give the government enough of an equity stake in the distressed assets that would be bailed out; that it didn't provide for enough oversight by Congress; and that it didn't offer homeowners enough protection from foreclosure.

McDermott also said he wished Congress could hold hearings on the bill.

"We're trying to do this on the back of a galloping horse," he said.
Despite the setback for the bill, McDermott said he thinks negotiators will resume discussions and produce a financial rescue package that can win approval.
"Every time something like this happens, people think it's the end of the world; it's not," he said. We're going to come up with something, I think, because everyone agrees something needs to happen."

"For all the talk of protecting the taxpayer, there were only limited promises that the taxpayers' $700 billion investment would be paid back and there were no provisions to help struggling homeowners," Inslee was quoted in a news release from his office.
"We needed a pro-growth bill to stimulate the economy, and that is not what we got," Inslee said in the release. "The American people deserve better. I could not, with good conscience, vote for the bill presented to me."

"Undeniably, action is necessary to address the crisis in our financial markets and ensure that credit remains available for middle class families to buy homes and put their children through college. That's evident by the daily fluctuations in the market. I'm hopeful that Congress will soon consider a modified version of the bill that was rejected today that will stabilize markets, utilize more private capital, and bring new oversight, reform, and accountability while protecting taxpayers.

"It's more important to get this legislation right than to act in haste. Panic on Wall Street brought us to this point, and we cannot let panic in Congress push through a remedy that is worse than the illness. Instead of a $700 billion blank check, we need a comprehensive package that helps Wall Street recover with more private capital, not taxpayer dollars; that holds accountable the bad actors who contributed to this crisis; and that enforces existing laws while modernizing outdated ones."

"Darcy believes we need to do something to strengthen our financial markets but she did not support this current bailout package. She felt it did not do enough to protect taxpayers andlimit out of control executive pay. And it did not address in an effective way the deregulation and lack of oversight over the financial markets that has been responsible for putting us in this situation in the first place." � Sandeep Kaushik, Burner spokesman.

"Like many Americans, I had major concerns with the Bush Administration's initial financial recovery proposal. It contained no help for ordinary Americans struggling with their mortgage payments, no oversight and no protection for taxpayers. It was a major power grab attempt by the Administration in the form of a $700 billion blank check and Congress correctly rejected that plan. I also worried about the true extent of this economic crisis � would it just punish Wall Street people who acted unwisely? Or would it impact us all? And, if the latter was true was action by Congress required?"

"After listening to many of my constituents, small business owners, local bankers, and many others in the business and financial world, I have concluded that this crisis is more serious than just the normal downside of the business cycle; that failure to act by Congress could turn a severe economic slow down into a panic--a run on banks and all financial institutions that could plunge us into a deep and lasting recession; and that the plan before Congress, while offering no guarantees, represented a prudent and necessary step to prevent this much more painful economic outcome."

"The financial crisis we are facing right now is greater than anyone could imagine. It is difficult for all of us to get our arms around the depth and complexity of this crisis. The decision on whether to support this package is one of the most difficult I have faced. I agree this bill is much better than the one we started with. It does more to protect the taxpayer, it does more to ensure Wall Street executives are held accountable, and it does more to increase oversight.

"Despite the positive changes that were made, I voted against this bill because, on principle, I am not convinced it is the right approach and I believe there are still numerous questions about its feasibility. Committing 700 billion of our tax dollars requires a longer, more thoughtful debate."

"I judged this bill on two primary grounds: what could the cost be to the taxpayers and is it good policy for the federal government to seize the financial markets in this way.

The final bill provides more taxpayer protections than the first proposal, yet it still potentially leaves taxpayers holding the $700 billion bag for the reckless actions of Wall Street and that is something I cannot support.

And on the question of increased government intervention in the marketplace, I am just plain opposed to such a massive intrusion into the economy and the marketplace.

As to the crisis about which we are warned, I hope it can be abated, though I do believe additional steps can be taken to allow for the infusion of new capital, instead of focusing solely on preventing a freeze of existing capital. I also believe an insurance-centered approach would allow for relief in a way that places the responsibility for paying on Wall Street and those being bailed out."

Howie P.S.: You can watch Nancy Pelosi's remarks that "Lead to GOP Finger-Pointing" here, and Barack Obama's remarks yesterday here. Ben Smith is now reporting that Obama "steps off the sidelines with a specific proposal calculated to win more Democratic support for the bailout, and a promise to involve himself personally. His statement, out early this morning," here. Ken Camp reviews the options in "Bailout: What's next" (NPI Advocate). Matt Stoller chimes in with "Treasury Officials Admit Bill's CEO Compensation Measure and Restrictions on Paulson Were a Farce" (H/t to Glenn Greenwald who's no fan of the bailout bill that failed yesterday). Booman says "Be a Grown-Up...it is an acceptable piece of legislation under the circumstances." Ari Melber, riding onboard Air Obama, has "Obama Demurs on McCain Bailout Attack, For Now" this morning. Ari says ends with this back and forth

Jeff Zeleny, a reporter for The New York Times, crouched near the motorcade and asked for a response to McCain’s latest attack — that Obama was “injecting politics” into the fight over the bailout.

Obama said he had already addressed the issue in his speech on Monday, and he pledged that he would have more to say tomorrow. This is a campaign, so that promise is pretty safe.

Obama also yelled back that he’d learned not to take the bait — though that’s not an exact quote, and I’m not sure what it means anyway. (McCain’s bait? Zeleny’s?)

Howie P.P.S: I vote for the bait in question as belonging to McCain. 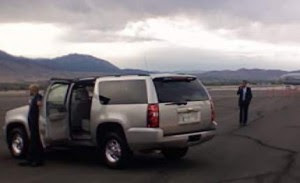 Barack Obama
Posted by Howard Martin at 4:25 AM