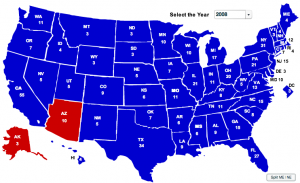 New narrative alert: Sen. Barack Obama will win this election — in a landslide.

But wait, weren’t all the experts and pundits worrying about Obama’s demise just one month ago? Well times change.
Markets fall. Running mates get exposed as embarassingly unqualified. So now this week’s conventional wisdom — first teed up on the front page of the Sunday New York Times and now spreading across the chattering class — is that Obama will not only win, but win big.

The Times analysis focused on the economy, reporting that pocketbook issues were powering Obama “in at least nine states that voted for President Bush in 2004, including some that neither side thought would be on the table this close to Election Day.

The piece included caveats, but flip to the back of the paper and you’ll find bolder predictions. On Monday, conservative columnist David Brooks flatly “called the election for Obama.” (He was speaking at the American Magazine Conference, as Advertising Age reported.) Even Clintonites are getting in on the act.

“It’s over,” says Howard Wolfson, the Clinton press strategist turned Fox News commentator (and sometime blogger). “If the election were tomorrow, Obama would win all of the states John Kerry carried and add Iowa, New Mexico, Colorado, Virginia, Nevada, Ohio and Florida,” he blogged this week. “This dynamic is very unlikely to change. John McCain’s goal in the first debate was to discredit Sen. Obama as a credible commander in chief… He didn’t come close. Absent a domestic terror attack the economy will remain the No. 1 issue in the race, and there is little Sen. McCain can do to make up [the] gap.”

I found the August hand-wringing about Obama’s problems overblown. While these have obviously been two great weeks for the Democratic nominee, this new narrative is also over the top.

Perceptions change quickly in politics. A “terror attack” is not the only event that could upend this race. Let’s dial it down — how about a gaffe in the remaining debates? Or new revelations about any of the candidates?
In this volatile market, you’d think people would be more careful about hedging their bets.

Barack Obama
Posted by Howard Martin at 9:23 AM