"Michelle Obama Revs Up in the Homestretch" 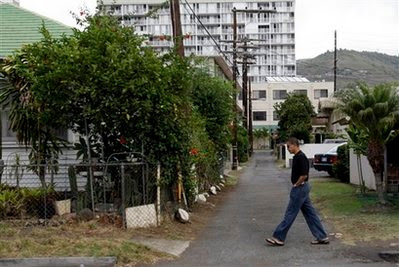 AKRON, Ohio, Oct. 24 -- Michelle Obama is nearing the finish line of a race that has become her quest as much as her husband's. Once, scant dozens of people filed in to meet her in small Iowa towns. She now routinely draws thousands: in Gainesville, Fla., 11,000; in Pensacola, 7,000.
On Friday, she drew overflow crowds of 2,000 people in Columbus and here while standing in for her husband as he visited his ailing grandmother in Hawaii. Speaking without notes, she traded her favored fireside voice for a more fiery one, calling out to people to vote early, if not often.

Obama paused to tell audiences of her husband's decision to leave the campaign trail for 48 hours to visit Madelyn Dunham, the grandmother he calls "Toot." At a telephone bank here, Obama told a potential supporter that Dunham "is sick and may not be with us much longer."

Dunham did much to raise Barack Obama, born to an 18-year-old mother with a certain wanderlust. He credits Dunham with sacrificing for his upbringing and imparting a hardscrabble Midwestern sensibility grounded in her Kansas roots.

"He said the other night, 'You know, I got my toughness from Toot,' " Obama told the crowd in Columbus. "Because she taught him with her quiet confidence and that love and support that he could do anything," she said.

In Akron, she mentioned a conversation with a voter who described her own problems -- she went blind, she lost a son, her grandson went to war, her husband left her -- and then told Michelle that she is praying for Barack's grandmother.

"Now that's America right there," Obama said. "On behalf of my family, thank you. We will be fine."

Obama, who has been juggling roles at home and on the road since the campaign began nearly 21 months ago, recently said she enjoys campaigning more than she expected. Yet as she has traveled the country, the cheers of supporters have been mixed with challenges to her patriotism from critics, including jabs from Cindy McCain and Republican vice presidential nominee Sarah Palin.

It was in Wisconsin in February that Obama said, "For the first time in my adult life, I am really proud of my country. Not just because Barack is doing well, but because I think people are hungry for change." She explained later that, as someone who had felt disconnected from politics, she was pleased to see "people rolling up their sleeves in a way that I haven't seen, and really trying to figure this out."

Supporters said they understood, but the damage was done. McCain took the opportunity to declare, "Yes, I have always been proud of my country." Palin delivered a similar slam, spawning a T-shirt design that proclaims, "Always Proud."

Criticism became farce when a Fox News anchor asked whether the Obamas' congratulatory fist-bumping the night he clinched the Democratic nomination was a "terrorist fist bump."

The anti-American narrative gained enough traction that the campaign felt forced to respond.

In Fort Wayne, Ind., last week, campaign aides placed Michelle Obama in front of no fewer than four American flags. A supporter, just before he led the crowd in the Pledge of Allegiance, said of the aspiring first couple, "We have two great patriots who love this country."

In the campaign's final weeks, Michelle Obama marches forward. She spends two to four days on the road each week, limiting her time away from their two daughters, whom she calls "the reason I breathe every day." Her staff tries to schedule her first speaking event in the middle of the day, to give her time to get the girls dressed, fed and off to school before she catches her small chartered jet.

If she spends a night on the road, Obama tries to get home before dinner the next day. Most weekends, she is home, but one recent weekend, the girls stayed with one of her close friends, Yvonne Davila, who has daughters about the same ages as Malia, 10, and Sasha, 7.

"We are co-parenting our children. Her kids have toothbrushes at my house," says Davila, who owns a marketing company and lives 10 minutes from the Obamas' home in Chicago's Hyde Park neighborhood. "I pick up the kids for ballet and soccer and we do shopping sprees. I took all the kids shopping last weekend."

On Thursday, the Obama girls went to Davila's house to make Halloween cookies and cupcakes. On Friday, Davila took the girls to a party in honor of the older girls winning their soccer league championship. Mostly, Obama relies on her mother, who retired last year, to take care of the children when she is away or dialing into radio shows from campaign headquarters.

Obama has developed a focus on working families and military families, but her chief campaign-trail role from the beginning has been as portraitist, etching the profile of an unfamiliar junior politician with an uncommon background and an unusual name. Her husband is one of them, she assures listeners. Or, as she says several times in each speech, "He gets it."

As she spoke of rising food costs, shrinking job opportunities, elusive health care and the fear that the mail will bring a foreclosure notice, she created an opening to speak about her husband and his history.

But the history she chose to share was not his eight years in the Illinois Senate or nearly four in Washington. She did not mention Columbia University or his leadership of the Harvard Law Review, as she has before, or his dozen years as a constitutional law professor at the University of Chicago. What she said was, "We're both regular folks."

"He doesn't get it in some theoretical, disconnected, philosophical way," she said, responding to critics who consider Barack Obama too cool and detached. "He gets it because he's lived it. You see, there's something that happens to folks when they grow up regular."

The "regular" Obama of her narrative is the child born to a white teenage mother and an absent black father, then raised in part by a strong grandmother, who imparted a measure of her own mettle. This Obama rode scholarships and loans to the Ivy League, then scorned Wall Street to work as a community organizer in Chicago as steel plants were shutting their doors.

"Don't we deserve a leader who knows what it's like to carry a little loan debt?" Obama asked. "Barack Obama knows it because he's lived it. Let me tell you something, Akron, Barack Obama gets it."

Before her speech, Obama dropped into the Akron campaign headquarters, where a dozen volunteers were dialing for voters. Taking a telephone from a supporter, Obama said cheerily, "How are you! You're still undecided? That's okay. What can I tell you about my husband?"

Over the next few minutes, Obama did some listening and some answering, offering a careful rationale for an Obama presidency: "We've been doing the same thing for the last eight years and it hasn't worked." She delivered a defense of her husband's credibility: "He's a fighter for regular folks, and that's our background."

"We're living close to the issues," she said in a soft voice, relating her own upbringing as the daughter of working-class parents who did not attend college. She mentioned her mother, retired and living on a pension; Barack Obama's sister, a teacher; and his ailing grandmother, who has long been unable to travel.

As she hung up, she said, "That's my pitch. Thank you for letting me go on and on."

Volunteers asked for her autograph before she climbed into her motorcade for the short ride to Buchtel High School, a diverse crowd and a welcome only slightly less raucous than her send-off. She started with a cheer and finished with a shout, creating a crescendo familiar to watchers of another Obama known for an ability to motivate a crowd.
"Can we do this?" Obama called repeatedly to growing roars of yes. "All right, let's change the world!"

Barack Obama
Posted by Howard Martin at 5:01 AM

*
*
*
Should The top management of the Public listed company be responsible for the company performance, eg company nearly get wind up?
*
*
http://bailoutmovie.blogspot.com/
*
*
Are you a Partisan?

Should they give their view......? If any party did not give their views, send it to their supporter to question them....
use it as a last min topics to support your supporters on this view points...