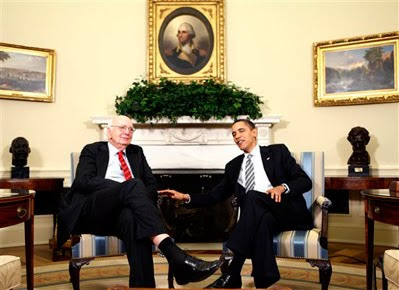 Finally President Barack Obama has come to his senses on financial regulation. His endorsement of what he calls the “Volcker Rule” for once puts him squarely on the side of ordinary Americans as opposed to the banking bandits who have so thoroughly fleeced the public.
The proposal from former Federal Reserve Chairman Paul Volcker basically involves restoring the spirit, if not the letter, of the 1930s Glass-Steagall banking regulations to prevent another Great Depression. It means separating the activities of commercial banks, entrusted with the deposits of ordinary folks, from the antics of the financial high rollers who are presumably dealing with wealthier and more knowledgeable investors. Commercial banks were intended to be heavily regulated and insured by the government to protect the savings of unwary citizens. Less risk-averse investors and the firms that handled their funds could fend for themselves, and if there was a collapse there would be no innocent victims requiring a government bailout.

This setup worked splendidly for more than six decades, until the rules were changed to permit the merger of the two types of banking activity, which never would have happened had President Ronald Reagan renamed Volcker as head of the Fed back in 1987. To reappoint Volcker would have been the logical move given his spectacular record in taming inflation, which he brought down to 3.6 percent after it had risen to 11.3 percent thanks to the energy crisis of 1979. Reagan went with Alan Greenspan instead because of their shared ideological fervor for unfettered free markets. But the repeal of Glass-Steagall required bipartisan support, and that eventually came with the presidency of Bill Clinton, who reappointed Greenspan and his fellow free-market ideologues Robert Rubin and Lawrence Summers to head the Treasury Department. They joined forces with the Wall Street lobby, and as a result Glass-Steagall was repealed in 1999 when Clinton signed the law eliminating it.

Unfortunately, and despite the collapse of the banking system brought about by the shenanigans of the “too big to fail” conglomerates permitted in the new deregulatory environment, Obama has wasted the last year and trillions of taxpayer dollars bailing out Wall Street without putting significant new rules in place to govern reckless behavior. Only now, with the economic disaster bankrupting the government, has he turned to Volcker for leadership. And in testimony Tuesday before the Senate Banking Committee, Volcker offered the essential justification for needed banking legislation:

“The basic point is that there has been, and remains, a strong public interest in providing a `safety net’—in particular, deposit insurance and the provision of liquidity in emergencies—for commercial banks carrying out essential services. There is not, however, a similar rationale for public funds-taxpayer funds—protecting and supporting essentially proprietary and speculative activities.”

Investment houses would still be permitted to play freely at the Wall Street casino, but they would have to pay the consequences of their own failure. In the event that the largest of them approached collapse, the government would still step in—not to save them but to dispose of the body in a way that did not endanger the health of others. As Volcker put it, when it would come to dealing with the impending collapse of an investment giant: “The mandate is to arrange an orderly liquidation or merger. In other words, euthanasia, not a rescue.”

Euthanasia was applied to Lehman Brothers but not Goldman Sachs, which was allowed to suddenly jump over the wall to become a commercial bank and thus eligible for TARP funding and many billions more from the government.

The biggest banks, whether originally commercial or investment banks, are now screaming their predicted pain at the prospect of new regulations—and no wonder. An analysis of the five top banks affected, led by Goldman Sachs, shows they stand to lose $13 billion in revenue next year if the proposed regulations pass, according to Bloomberg. But there is hope for at least some bipartisan support for the restoration of a wall separating these two very different sorts of banking activities, as indicated by a bill co-sponsored by Sens. John McCain, R-Ariz., and Maria Cantwell, D-Wash., to explicitly restore the safeguards of Glass-Steagall.
Please don’t let your eyes glaze over on this issue as a matter of arcane economic regulation. It’s the ballgame as far as breaking the death grip of Wall Street over our economy. The projected $1.6 trillion deficit is only the first installment on decades of crippling debt that will pile up because of the irresponsibility of a radically deregulated banking system. This should be the only reminder we need that little else matters in the way of public policy discussion as long as Wall Street bleeds us dry.

Posted by Howard Martin at 9:06 AM