Can you say "Governor Russ Feingold"? 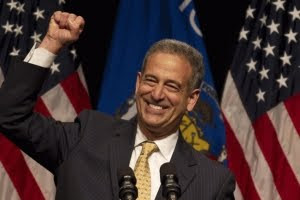 
The question isn't really if Scott Walker and his fellow Wisconsin Republicans will suffer fallout from their surprise maneuver Wednesday night. It's how severe the fallout will be.

Walker and the state's Republican senators, as you've surely heard by now, decoupled their proposal to strip public workers of their collective bargaining rights from a budget bill, allowing them to push it through the upper chamber with the entire Democratic caucus still holed up across state lines in Illinois. The GOP-controlled Assembly will presumably pass the bill today and Walker will then sign it.

Politically, this represents a wholly reckless move. Wisconsin's state government has been paralyzed for weeks because of the collective bargaining impasse, and in that time public opinion swung sharply against Walker and his plan. All of the noise generated by the Democrats' resistance seemed to have convinced a majority that Walker's plan is out of the mainstream. That these same voters will now hear that Walker and the GOP resorted to an extraordinary measure to jam it through will only harden this assessment -- and, potentially, make GOP legislators and the governor himself vulnerable to recall efforts.

The recall campaign will first target the handful of Republican senators who have already been in office for a year and are therefore eligible to be recalled. Petitions are already circulating in their districts. Walker himself is insulated through next January, when his first full year in office will be complete. Only then will his opponents be able to take out petitions to recall him. But that hasn't stopped more than a few Democrats from promoting their dream recall candidate: Russ Feingold, the former three-term senator who was flushed from office in last fall's anti-Democratic tide. MORE...

Posted by Howard Martin at 8:24 PM