(Updated) "Obama on the campaign trail for Democrats" 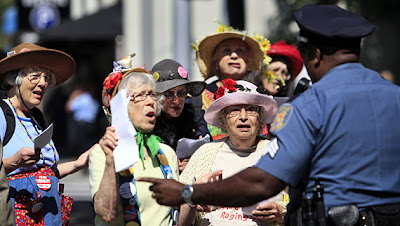 Members of the Raging Grannies protest group are told by Seattle Police Sgt. Bryan Clenna, right, to move off the sidewalk before a visit by President Barack Obama. (Elaine Thompson / Associated Press)

UPDATE: From this article:

At a luncheon fundraiser for Murray at a downtown Seattle hotel, Obama rolled out crisp versions of several attack lines, all designed to link Republicans to the economic policies of former President George W. Bush.

"Their basic philosophy goes something like this: We're going to cut taxes for millionaires and billionaires, folks who don't need it, weren't even asking for it. And we're going to cut rules for special interests, gut regulations that protect clean air and clean water and things that most of us value. And then you're going to cut working folks loose to fend for themselves," Obama said.

Later, he said, "What this campaign is coming down to is that between now and November, they're betting that you will all come down with a case of amnesia."

President Obama on Tuesday continued his hopscotch tour of blue states, honing attack lines for election season as he regaled partisan Democratic crowds with dire warnings of the economic consequences if Republicans gained control of Congress this fall.
(SNIP)
In Washington state on Tuesday, Obama raised money and support for Sen. Patty Murray, a member of the Democratic leadership team who is facing a strong challenge from Republican Dino Rossi.

Obama derisively said Rossi "earned the distinction of being the first candidate in the country to call for repeal of Wall Street reform.… Don't you think that's strange?"
MORE...

Howie P.S.: The article nevers informs its readers what exactly the "protest group" was protesting.
Posted by Howard Martin at 5:34 AM