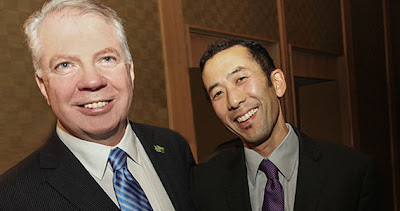 HIS BIG VICTORY Ed Murray, 57, and his partner of more than 20 years, Michael Shiosaki, celebrate marriage equality on election night.


The Man Behind Marriage Equality Sets His Sights on City Hall----Ed Murray isn't running for Seattle mayor as the gay guy. "It can work both ways," says Murray, who on Wednesday filed an exploratory committee for his campaign. "If people see me just as the gay candidate, they will vote against me. Even gay people will vote against me. I have to be the gay who did something." MORE...

Posted by Howard Martin at 3:10 PM