The Obama administration is selling the tax deal as hard as it can -- sending out Vice President Biden with the e-mail blast and economic adviser Austan Goolsbee with the whiteboard and the talk on our show last night.

Economist Paul Krugman says he has spent the week trying to make some kind of peace with the idea of giving Republicans the tax breaks they want for the wealthy in exchange for unemployment insurance and tax breaks for the rest of us. Krugman sounds like he's living in our neighborhood, though, in that he doesn't like being called out by President Obama as an overly demanding purist and that he thinks the president has mostly just postponed the real debate. Krugman writes in the NYT:

[C]oncerns about the tax deal reflect realism, not purism: Mr. Obama is setting up another hostage situation a year down the road. And given that fact, the last thing we need is the kind of self-indulgent behavior he showed by lashing out at progressives who he feels aren't giving him enough credit.

In Krugman's book, the president's display of anger amounts to a show of weakness -- the last thing he needs just now.

Howie P.S.: More push-back from The Left, professional and otherwise:

An Open Letter to the Left Establishment---The election of Obama has not galvanized protest movements. To the contrary, it has depressed and undermined them, with the White House playing an active role in the discouragement and suppression of dissent – with disastrous consequences. The almost complete absence of protest from the left has emboldened the most right-wing elements inside and outside of the Obama administration to pursue and act on an ever more extreme agenda.

We are writing to you because, as well-known writers, bloggers and filmmakers with access to a range of old and new media, you have in your power the capacity to help reignite the movement which brought millions onto the streets in February of 2003 but which has withered ever since. There are many thousands of progressives who follow your work closely and are waiting for a cue from you and others to act. We are asking you to commit yourself to actively supporting the protests of Obama administration policies which are now beginning to materialize. MORE... 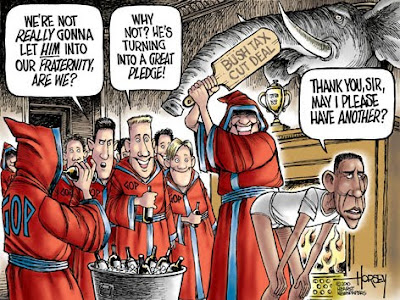 Posted by Howard Martin at 5:44 AM