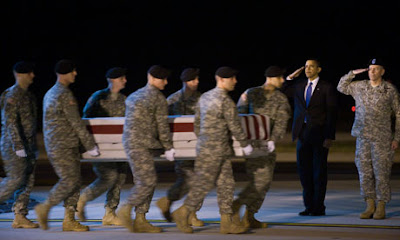 Obama would rather not talk about it unless he cannot avoid it.

This reluctance is political and intellectual. Veteran foreign policy analyst Leslie Gelb, writing in the Daily Beast, said Obama can no longer persuasively answer the basic question: why are 100,000 American troops in Afghanistan, at an annual cost of $113bn?

"Afghanistan is no longer a vital interest of the United States but continuing the war there tears at our own nation's very vitals," Gelb said, arguing that international terrorism now has many bases, including Stockholm and London, and is no longer centred in the Hindu Kush (if it ever was). He added:

"With America drowning under a $1.5tn deficit for next year and an almost $15tn overall debt, we are verging on banana republic-hood... Of course I feel for the Afghans; but I feel far, far more for Americans." MORE...

Posted by Howard Martin at 6:41 AM