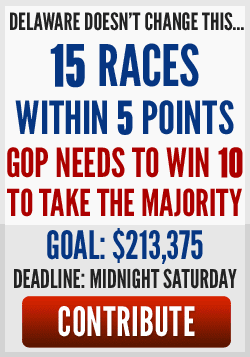 In the wake of the Delaware primary, everyone is talking about the Tea Party and momentum. I am focused on three numbers: 15, 5, 10.

We've got 15 races within 5 points. Republicans only need 10 to get their grubby paws on the Senate. That's it. 10 wins, and Republicans will be living their dream. Mitch McConnell in charge. Insurance companies in control. Senate committees investigating President Obama all the way from his birth certificate to "death panels." Tuesday's primaries were a stark reminder of how hypermobilized the radical right is.

In regards to the midterm elections, he referred to his “now is not the time for bed-wetting" statement after the party lost the Massachusetts Senate election. He reiterated what he had stated in a UPI article: “This will be a tough election for our party and for many Republican incumbents as well. Instead of fearing what may happen, let's prove that we have more than just the brains to govern – that we have the guts to govern."

“Rove’s group is all secret money. It would be great if there was more attention paid by the media to force these guys to disclose who’s trying to buy Congress,” Plouffe says.
(SNIP)
“Obviously, you need the economic dark clouds to lift and we know that’s not going to happen overnight,” Plouffe said. “But I do think our party can have a better election than a lot of observers believe if two things happen over the next 50 days—and, in some cases, much less than 50 because of early voting. One: That our candidates in those districts in those states make it a choice between two people. The more this is a choice, the more you bring the Republican into the discussion, the more motivational that’s going to be for Democrats. And secondly: We’ve obviously got to kick Democratic turnout up a little, because who comes out to vote is just as important as how they vote. Republicans are coming out in big numbers right now. I don’t think we can expect that to lessen. We’ve got to get Democrats out.”
(SNIP)
“We live in a very divided country,” he said. “We got 53 percent of the vote, and the 47 percent who voted against us did not do so casually. And when you’re trying to make progress in these tough economic times—now remember, the only thing that was worse was the Great Depression—it’s to be expected. At this point, Ronald Reagan’s approval rating was in the mid-30s [Obama’s is in the mid-40s], so I still think there’s a great deal of confidence given the economic situation we’re in.”

He added: “I do think, as time passes, there is going to be a great deal of understanding and appreciation for the tough decisions he made to help lift the economy while still focusing on the long term—like health care and energy. A lot of people in Washington judge everything through the prism of politics, not through the facts: Is he trying to do what he said he’d do in the campaign? Are we moving in the right direction? Is he being consistent to what he promised to do? Those are the questions that are really important to me, and I think on those questions, I’m very proud of the work that’s been done.” MORE...

Okay, so we now have two national polls suggesting that the Dem strategy of tying the GOP to Bush may finally be gaining some traction. For Dems, it's not a moment too soon. MORE...

Howie P.S.: I went to Town Hall in Seattle last night for Plouffe's talk/book signing. One point he made (or straw he grasped, if you prefer) was that most people don't get their opinions based on national media. His advice:

what we have to do is try and reach these voters one on one, have a conversation between a neighbor, a family member.

And one last pundit nugget on the 2010 midterm elections from Celinda Lake, discussing the "POLITICO/George Washington University Battleground Poll":

So get busy with that demo in your contacts-address book!
Posted by Howard Martin at 7:00 AM