Elizabeth Drew on Obama and the debt limit: "What Were They Thinking?" 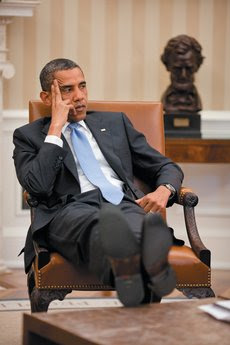 Pete Souza/White House---President Barack Obama at a meeting with his advisers in the Oval Office, June 8, 2011

Someday people will look back and wonder, what were they thinking? Why, in the midst of a stalled recovery, with the economy fragile and job creation slowing to a trickle, did the nation’s leaders decide that the thing to do—in order to raise the debt limit, normally a routine matter—was to spend less money, making job creation all the more difficult? Many experts on the economy believe that the President has it backward: that focusing on growth and jobs is more urgent in the near term than cutting the deficit, even if such expenditures require borrowing. But that would go against Obama’s new self-portrait as a fiscally responsible centrist.

Lawrence Summers, Obama’s recently resigned chief economic adviser, said on The Charlie Rose Show in July that he found it “dispiriting” that “all of the energy is on the projected deficits…when the problem right now is that the economy is in danger of stagnating from lack of demand.” MORE...

H/t to Ari Melber and Booman. Gaius Publius (AMERICAblog) also comments on this and tosses Paul Krugman into the conversation.
Posted by Howard Martin at 5:54 PM