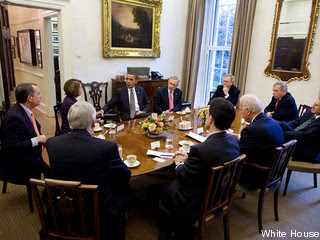 UPDATE: TPM has now added this to original post (Go to the link @TPM and scroll down to see it):

"To sell it to his members, Boehner laid out the deal in a Powerpoint presentation that describes the agreement's many similarities to his own debt limit plan.

"This is an important moment for our country," McConnell noted in response. "I can say with a high degree of confidence that there is a framework in place to assure a significant degree of cuts to Washington spending."

Both men announced the intent to meet with their caucuses Monday morning, to sell the plan, and round up votes for what will have to be rapid legislative action if both chambers are to pass the plan before the country's borrowing authority expires late Tuesday.

President Obama discussed the framework in a public statement at the White House Sunday evening, and urged members of both parties to support the plan. He also criticized Congress for touching off this crisis, and for being unable to arrive at a single grand bargain to improve the country's fiscal situation (with spending cuts and tax increases) and raise the debt limit as well.

"Is this the deal I would have preferred? No," Obama said. "But this compromise does make a serious down payment on the deficit reduction we need."

The announcement came just as House Speaker John Boehner (R-OH) hosted a conference call with his own, unruly caucus, to sell them on the same plan. Passing this bill will be a heavier lift in that caucus, where scores of Democrats and Republicans are expected to defect. MORE...

Howie P.S.: I HOPE this is not one of those "Mission Accomplished" moments. Keep the champagne cold and uncorked a while longer.
Posted by Howard Martin at 6:07 PM