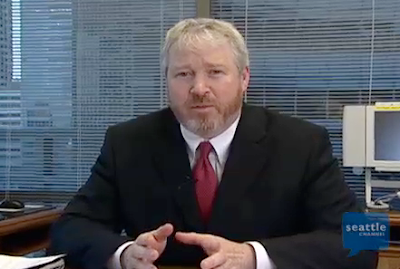 Mayor Mike McGinn sent out an email (and video message) to city employees today asking city department heads to “pause” on the sweeping mandate he announced when he took office earlier this month to layoff 200 senior-level positions.

McGinn’s spokesman Mark Matassa confirms that the mayor is adjusting the process, noting “the high degree of concern and low morale” the original sweeping mandate caused among city staffers.

Matassa says Mayor McGinn “still believes” there was huge growth in upper level positions during the Nickels years and there need to be cuts.

(When McGinn first made the announcement on January 4, he pointed out that the city had 639 senior level employees eight years ago, but the number had grown to 951 today, an increase of 49 percent—while the overall city workforce increased only 2 percent during the same time period.)

However, rather than going ahead with layoffs now, McGinn wants the departments to use the process of identifying the staffing cuts and merge those details into the larger mid-year budget process—reevaluating what needs to be cut in the larger context of the department’s work.

Matassa adds that the $40 million budget shortfall may get worse with preliminary predictions puttig the hole at $50 million.

Another reason to adjust the sweeping staff cuts, Matassa explained, is that “bumping rights” (that is, who got promoted when and into what position) blurs the lines between actual people and positions.

“Its not so simple,” Matassa said, to just yank 200 positions, “when you get into the nitty gritty. There are unintended consequences.”

I have asked department directors to pause work on phase II of the senior-level position review exercise. As originally designed, in this phase departments were to develop position reduction proposals to meet their assigned target levels. Knowing that we will have to re-tool our operations in the face of upcoming budget reductions, I have now asked departments to integrate plans to reduce the number of senior-level positions into larger exercises around meeting potential mid-year reductions and in developing the 2011 budget. This will also allow us time to review senior-level positions in the context of Council’s span of control Statement of Legislative Intent (SLI), which is due to the Council on June 30, 2010. This will allow for a more deliberative review of our staffing levels in the context of changes that will be necessary in the face of our serious financial challenges.

The full email is below the jump.It includes a link to the video address that Mayor McGinn also sent to city employees where he says he is “recalibrating” the senior level cuts.

Posted by Howard Martin at 6:44 AM