"Can Cheryle Jackson End the War in Afghanistan?" (with video) 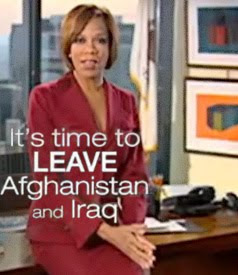 Add Illinois to Pennsylvania as states where there is a contested Senate primary in which the war in Afghanistan has become an issue.
The Chicago Tribune reports that the two leading contenders for the Democratic nomination for Barack Obama's former seat in the Senate have staked out diametrically opposed positions. A Tribune poll last month reported that Alexi Giannoulias and Cheryle Jackson were the leading contenders for the Democratic nomination. On Afghanistan, the Tribune reports that Cheryle Jackson wants to end the war, while Giannoulias supports it:

"It is time to take care of America again and time to bring our troops home," said Democratic Senate contender Cheryle Jackson, a former president of the Chicago Urban League. "Until we stop spending hundreds of billions on wars, we will not have the focus or money to solve the challenges we face at home."

But first-term state Treasurer Alexi Giannoulias, a Democrat, said he fully supported Obama's strategy for Afghanistan and indicated that those who oppose it are engaging in wishful thinking.

It is, of course, during the election cycle - especially the primary election cycle - that our political system is most vulnerable to public opinion, and that vulnerability, if seized upon, can have a lasting effect on national politics. As a result of the 2006 primary election cycle - in which, most prominently, Ned Lamont defeated Joe Lieberman for the Democratic nomination for Senate in Connecticut - opposition to the war in Iraq became established nationally as the predominant Democratic position, and the subsequent Washington fight over Iraq policy helped pave the way for a timetable for the withdrawal of US forces to which the Bush administration ultimately agreed. At the beginning of the 2008 presidential primary cycle, all the leading contenders for the Democratic nomination - including Barack Obama - were insisting that the US must threaten Iran with military force. By the end of the cycle, Obama was the diplomacy candidate.

Spectacularly, even opposition to US policies towards Israel and the Palestinians is surfacing in the Jane Harman-Marcy Winograd race, with Rep. Henry Waxman accusing Winograd of insufficient loyalty to Israel and Winograd standing her ground.

So, if you want to change national policy - in particular, if you want to end the war in Afghanistan - now is the time to raise your voice. Find out where the candidates in the Senate and House primaries stand on the wars - and raise the alarm.

Howie P.S.: Pennsylvania is a tough call for me.
Posted by Howard Martin at 1:35 AM