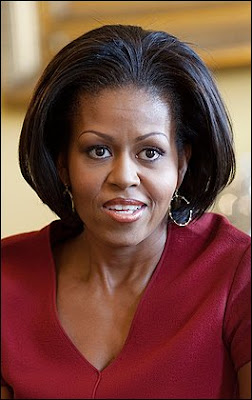 In a Wednesday afternoon interview that informally marked the beginning of her second year in the White House, first lady Michelle Obama declared her intent in 2010 to lead the administration's efforts to tackle the epidemic of childhood obesity. Through advocacy and outreach to businesses, nonprofit organizations and government officials, she personally hopes to nurture a generation of healthier children.

"I want to leave something behind that says because of the time that this person spent here, this thing has changed," she said. "I hope that will be in the area of childhood obesity."

And if she has to go to Capitol Hill, lobby lawmakers and delve into policy issues, she will do it. Whatever it takes, she said. Obama will begin her campaign by addressing the nation's mayors on the subject next week when the United States Conference of Mayors meets in Washington. They will not come to the White House; the first lady will go to them.

Obama sat down with a group of seven print reporters in the Old Family Dining Room for more than an hour to talk about the year that has passed and her plans for the future. The conversation, over coffee and pastries, was part of a typical work day, this one filled with meetings -- some on childhood obesity -- as well as hosting duties for a group of Brazilian exchange students. Dressed in a russet-colored, cap-sleeve dress and over-the-knee brown suede Jimmy Choo boots -- a fine alternative to pantyhose, she said -- Obama, with a new shorter bob, assessed her first year at 1600 Pennsylvania Ave. and declared herself "pleased."

"We've gotten a lot done," she said and listed her work with military families, the planting of the White House Kitchen Garden and the launch of an East Wing mentoring program for young women as key accomplishments.

She described the security breach that marred her debut as the nation's hostess as a "footnote" to an otherwise outstanding state dinner. And, she waded into the contretemps caused by the recently published remarks by Senate Majority Leader Harry M. Reid (D-Nev.) in which he described then-candidate Barack Obama's presidential chances as much improved because he is a "light-skinned" African American who had "no Negro dialect."

But of the some 200 events she has hosted as first lady, of all the experiences to be logged into a journal or inscribed in history, she was proudest and happiest that "my kids are sane."

"I'm happy that when I look at my daughters, I recognize them as the kids that they were before we got here."

She is also relieved that her mother, Marian Robinson, who had never lived anywhere other than Chicago, had settled into life in Washington.

Obama said she has also worked hard to maintain her connection to life outside the White House bubble -- without afflicting average folks with closed streets and snarled traffic -- and to shed her celebrity skin. Sometimes she reclaims her authentic self through excursions for burgers or when visiting students in her new home town. Sometimes it's by sitting down with old friends.

"I ask people who have seen us over the years, friends -- I even check in. It's like, do you still recognize me? When we sit down, does this -- do I still feel like Michelle, or are you tripping?"

Given the opportunity, there's nothing from 2009 for which she's craving a do-over. She's not longing for a few generous mulligans. Not even for the athletic shorts she wore disembarking from Air Force One at the Grand Canyon. Or for her unsuccessful lobbying efforts on behalf of Chicago's 2016 Olympics bid. Not even for the state dinner honoring India that was marked by two uninvited guests -- and possibly a third -- and that has drawn mea culpas from the Secret Service, launched a grand jury investigation and sparked harsh criticism of social secretary Desirée Rogers, whose friendship with the first couple dates back to their days in Chicago.

"The state dinner was an outstanding success. It's just the follow-up after it. I look at the reporting on the state dinner and go, 'Is that all that happened? Really?' Because I sat in a phenomenal dinner where the prime minister and his wife were, felt, so connected to the United States and they were so proud to be there. And the evening was so wonderful and it was so well-orchestrated," she said. "For me the other stuff that everyone is talking about is a footnote to what the state dinner actually was. So I wouldn't do that over."

The first lady also dismissed the suggestion that the security breach had left her especially unnerved or upset. "We have dealt with the Secret Service for many years now, because I mean, Barack got Secret Service during the course of the campaign," she said. "These folks are good at what they do. But, with that said, the White House and the Secret Service are working to ensure that processes are in place so that something like that never happens again. And you know, I agree."

She also played down another political brouhaha of the day: Reid's remarks about the president and race.

"Harry Reid had no need to apologize to me. Because I know Harry Reid. I measure people more so on what they do, rather than the things that they say," she said. "Each and every one of us around the table has probably said something in their lifetime that they regret or didn't accurately reflect what they actually meant at the time or it was taken out of context and so on and so on."

But issues related to race, particularly as they speak to her historic role as the nation's first African American first lady, is not something she takes lightly. "You feel the palpability of this change throughout the house and throughout the country."

The history that she and her family are making is part of the ongoing dialogue about race -- a conversation that did not end with the election of the first African American president, she said.

"The problems aren't solved," Obama said. "But we're still new at this. Civil rights, the movement, happened in my lifetime. It feels like it's been a long time but it hasn't.

"My great-great-great-grandmother was actually a slave. We're still very connected to slavery in a way that's very powerful. . . . That's my grandfather's grandmother. That's not very far away. I could have known that woman."

We need to turn theories into practice and assumptions into understanding, she said. "We need to keep having conversations until we get it right."

Howie P.S.: I'm still a big Michelle fan. One question: Why don't reporters write about clothes and hair when doing a story on Mr. Obama?
Posted by Howard Martin at 4:47 AM