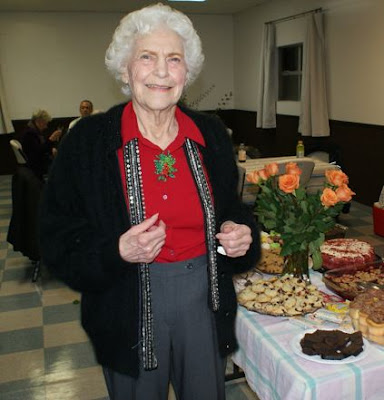 Her community-advocacy work was intense and serious – yet Delridge community activist Vivian McLean was also known for her whimsy.

After almost two hours of tributes – from politicians, from neighbors, from family – her memorial this afternoon at Delridge Community Center, 16 days after her death at age 90, ended with a round of “The Hokey-Pokey” (video*).

Though our view didn’t include every single member of the standing-room-only crowd, participation looked universal. That would have included King County Executive Dow Constantine, former Seattle Mayor Greg Nickels, City Council President Richard Conlin, City Councilmembers Jean Godden, Nick Licata, and Tom Rasmussen, County Councilmember Joe McDermott, and Deputy Mayor Darryl Smith. And neighborhood luminaries too numerous to name. Even Jim Diers, the former Department of Neighborhoods director renowned for his evangelization of “Neighbor Power!” was on hand; Diers is the one who urged mourners, “Let’s keep her spirit alive.”

There didn’t seem to be much likelihood Ms. McLean will ever be forgotten. And not just because you can see her legacy at places such as Vivian McLean Place, the apartments over Delridge Library, which she fought for, or in other projects by Delridge Neighborhoods Development Association – which she helped create. It’s the people on whom she has left such a mark, that will continue to tell her story, and carry her work forward. MORE...

Howie P.S.: I wanted to get up and say “thank you” to Vivian from all the newer residents of West Seattle who never knew her or knew who she was. She made our neighborhood a much more caring, safe and beautiful place with her relentless “community organizing.” THANK YOU VIVIAN!! (better late than never). Here's the slideshow.
Posted by Howard Martin at 6:09 AM