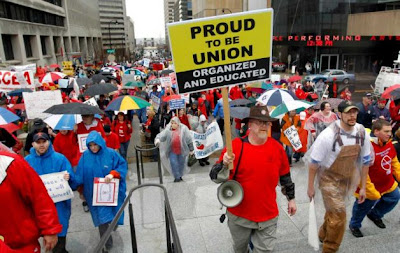 "Obama campaigned big, but he's governing small," said Larry Hanley, president of the Amalgamated Transit Union.Labor remains a core Democratic constituency and union leaders will stand with Obama in Detroit this Labor Day, where he will address thousands of rank-and-file members during the city's annual parade Monday.

But at the same time, unions have begun shifting money and resources out of Democratic congressional campaigns and back to the states in a furious effort to reverse or limit GOP measures that could wipe out union rolls.

The AFL-CIO's president, Richard Trumka, says it's part of a new strategy for labor to build an independent voice separate from the Democratic Party. MORE...

Posted by Howard Martin at 7:14 AM