“There’s definitely something going on here at Lewis-McChord that’s not being taken care of.” 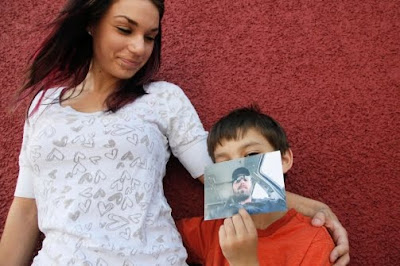 Noah Hagemann, 6, holds a picture of his father, U.S. Army Staff Sgt. Jared Hagemann, who was found dead on June 28 with a gunshot wound to his head. His wife, Ashley Joppa-Hagemann, left, believes he committed suicide., Elaine Thompson / AP Photo

At an Army base near Seattle, soldiers are committing suicide, murdering their families—and in one case, waterboarding their own kids. Winston Ross reports from a base on the brink.---

Hubert wound up at Coffee Strong, where she’s surrounded by folks who agree that the Army isn’t doing enough to help soldiers who come back from war. In the first year the shop was in business, there were about 170 soldiers coming in a month. Now, the number is up above 300, says Carter.

The group is now asking for an investigation at Lewis-McChord to find the root of the suicide problems, says Carter. But he’s already certain of one of them: “They’re sending soldiers on multiple deployments to Iraq and Afghanistan, and when they come back they’re expected to be ready to deploy again in a year or 15 months. That’s not enough time to recover from trauma.” Nor do soldiers who know they’re going back to war really want to deal with their issues, he says. “I’ve had soldiers tell me ‘I don’t want to go to therapy. I’ve got to keep my edge.’”

So far, the military solution has been to throw money at the problem, says Carter. The Army recently built a $53-million barracks facility for a transition battalion, for example. “That makes for something you can put on the news, but it doesn’t fix the problem,” he says. “Soldiers are starting to catch on to the fact that if the military really cared about them, they’d be doing more to help.”

Champion wants to see counseling upon a soldier’s return—at least a month’s worth—not as an option but an order, so that there’s no stigma associated with getting help. When her son went into the Army, she told him she wasn’t worried he’d get physically hurt, but that “there are some things you never ever need to see in your entire life. I don’t want you to come back with your head all screwed up. That’s what happened.”

And for failing to help him, Champion blames the military.

“The Army failed my son. All they do is treat them like a damned number,” she says. “You’re not supposed to bury your children.” MORE...

Posted by Howard Martin at 5:32 AM

Email ThisBlogThis!Share to TwitterShare to FacebookShare to Pinterest
Labels: lewis-mcchord