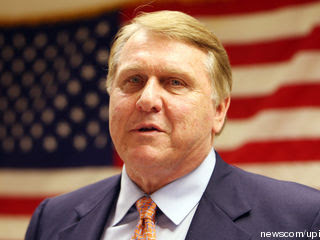 "How is that different than Mitch McConnell saying he wants to take out Barack Obama?" Hoffa said.

Progressive Fox News watchdog Media Matters For America charged that the clip had been deceptively edited in Fox's re-airing of it.

Hoffa said his tough tone reflects the nature of the forces massed against unions -- and tells the truth about the dangers faced by organized labor and their allies in the progressive movement during the Republican ascendancy.

"The right wing -- the tea party, backed by the Koch brothers, the Chamber of Commerce and the Walton family are underwriting, you know, bills to take away collective bargaining," Hoffa said. "Paul Ryan and Eric Cantor want to take away Social Security and Medicaid."

"The answer to that is, people that do that, is we're going to declare war on them," he added. MORE...

Posted by Howard Martin at 7:51 AM