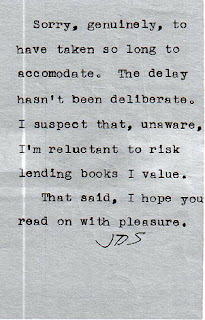 
Given the opportunity to ask J.D. Salinger one question in his later years most would have made a similar inquiry: “What have you been writing?” Few of us would have had the insight to ask a very different but equally telling question: “What have you been reading?”
That is exactly what happened in 1995 when the proprietor of the satellite TV company being used by Salinger at his Cornish, NH home inquired what the author considered his favorite book. Salinger not only answered the question, he also offered to lend his copy.
It might surprise some that Salinger’s best-loved book was The Landsmen by Peter Martin. Published in 1952 by Little, Brown, The Landsmen is described as a novel of Jewish-American roots set in a small village in Tsarist Russia at the end of the nineteenth century. Clearly, Salinger’s enthusiasm for Martin’s work evidences his interest in his own family heritage. The Landsmen depicts the very world in which Salinger’s grandfather grew up: the intricate but precarious tapestry of life once lived in small Jewish communities throughout the Russian Empire.
According to the recipient, “the best part of The Landsmen was the note” Salinger had slipped inside its covers. It reads as quintessential J.D. Salinger and can be viewed here or by clicking the small cover image that begins this post (Howie: go to  the "Dead Caulfields" link above).

Howie P.S.: As my daughter told me when she (and I) heard about this recently, "this is crazy," but my father wrote the novel described above. I knew my father the novelist and believe me, I'm no novelist.
Posted by Howard Martin at 12:12 PM