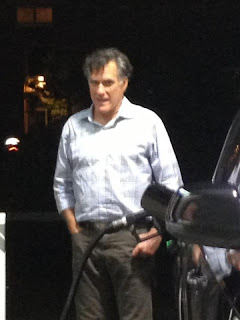 
Some people are still plenty curious about former presidential candidate Mitt Romney, it turns out. An image of Romney appearing to pump his own gas at a La Jolla, CA gas station was posted by Redditor mkb95 late last night, along with the observation that Romney “looks tired and washed up” and that “he didn’t have any security with him.” Mkb95 at one point clarified that this “was definitely not a negatively inspired post, I just thought it would interest some of you” and that “washed up =/= demonic.”
In the image, Romney appears much more casual than we’re used to seeing him on the campaign trail, his hair — usually so immaculately neat — tousled and his hands in his pockets.
Business Insider, for one, noted that many of the comments on the image have a “lay off the guy” tone to them.
Personally, if we were in Romney’s position, we’d want at least ten giant security people between us and any curious gawkers snapping photos while we wait at the gas station. Nobody needs to know about our penchant for gas station nachos.

Howie P.S.:  As calculating and dishonest as Willard is, I cannot help believing this is part of his latest attempted "redefinition." Actually it should be "5.0" or something.
Posted by Howard Martin at 10:42 AM