Daniel Schorr: Doing change "in the dark of night" (with audio) 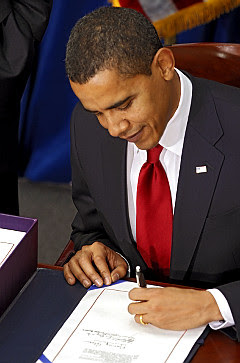 Signing his stimulus package in Denver on Tuesday, President Barack Obama spoke of lifting 2 million Americans from poverty into the middle class.

Until he had his bill, he talked little of poverty, preferring to cite benefits for middle class families, those struggling to pay tuition fees, and those who have lost jobs through no fault of their own. He did not make a point of the fact that the plan contains large benefits for the poor in the form of food stamps, services for the homeless, expanded Medicaid coverage and housing allowances.
The Center on Budget and Policy Priorities tells me that the number of people living in poverty has reached 37.3 million and is growing. But poverty has become the great no-no in political discourse, associated with that other frowned-upon word: welfare.

It was not that way in the Depression of the 1930s, when President Roosevelt spoke of rescuing the "one-third of a nation" who suffered in poverty. And in the 1960s, President Johnson launched a war on poverty, which left us with permanent institutions like Head Start and community health centers.

During the recent presidential campaign, we heard a lot from the candidates about aiding the middle class. But not so much, if anything, about aiding the persistent poor. Clearly, if the Obama administration wants to do something about repairing the social safety net, it will have to be done quietly.
So now, one can see signs of social policy development lurking behind the economic shock treatment. Conservative think tanks are watching carefully, suspecting that, in the dark of night, new entitlements are being created. But maybe that's the way they do change these days.

Howie P.S.: Another version of pragmatism is at work here.