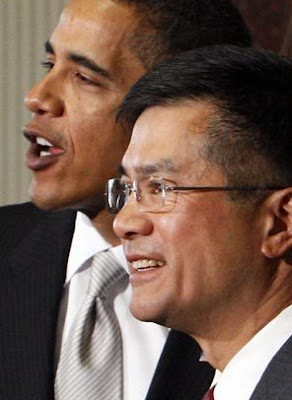 The former two-term Democratic governor who left office in 2005 holds experience in international trade and was an early supporter of Obama's main rival in the 2008 Democratic primary campaign, Hillary Clinton. He was the nation's first Chinese-American governor when he took office in 1997.
The pick marks the president's third attempt at seating a commerce secretary, filling in the membership of his Cabinet.

Locke is charged with promoting the nation's economic development at home while serving as an ambassador for American industry abroad.

"Our nation's economic success is tied directly to America continuing to lead in technology and innovation, and in exporting those products, services and ideas to nations around the globe,'' Locke said, joining Obama in the announcement of his nomination today. "The Department of Commerce plays a critical role in nurturing innovation, expanding global markets, protecting and managing our ocean fisheries and fostering economic growth."

In a statement issued by the White House, Obama said: "Gary will be a trusted voice in my cabinet, a tireless advocate for our economic competitiveness, and an influential ambassador for American industry who will help us do everything we can -- especially now -- to promote it around the world.

"I'm grateful he's agreed to leave one Washington for another,'' the president said, "and I look forward to having him on my team as we continue the work of turning our economy around and bringing about a stronger, more prosperous future for all Americans."

After attempting to assemble a more bipartisan Cabinet, settling on a Democratic former governor will leave the president's Cabinet with one registered Republican, Transportation Secretary Ray LaHood.

Locke has experience in trade matters. He is a partner in the Seattle office of the law firm Davis Wright Tremaine. The firm's Web site lists his specialties as China, energy, government relations and corporate diversity counseling.

The firm has offices in eight other cities, including Washington, where several dozen lawyers and lobbyists specialize in media, technology, energy and other fields. The Washington office advises several Fortune 500 companies.

Between 2005 and 2008, Locke served on the board of directors of Safeco, a Seattle-based insurance company taken over last year by Liberty Mutual Insurance.

The White House says that "Locke broke down trade barriers around the world to advance American products. Locke has worked closely with business, labor and government at all levels to successfully negotiate complex issues."

Locke, a son of Chinese immigrants, was elected governor in 1996, becoming the first Asian-American governor on the mainland. In 2000, he was overwhelmingly re-elected to a second term.

"Gary didn't learn English until he was five, but he earned the rank of Eagle Scout, worked his way through Yale University with the help of scholarships and student loans, and got a law degree,'' Obama said. "So Gary knows the American Dream. He's lived it. And that's why he shares my commitment to do whatever it takes to keep it alive in our time.''

Locke holds a bachelor's degree in political science from Yale University, and a law degree from Boston University.

The president should have an easy time winning Senate confirmation of the former governor. However, questions surrounding the Obama administration's intentions with the 2010 Census have raised concern among Republican critics.

Gregg had cited the White House's planned involvement in the Census, which is run by the Commerce Department, as one of his concerns.

"The first question for Governor Locke is whether he will block the brazen attempt by the White House to take over the traditionally nonpartisan census,'' Michael Steel, a spokesman for House Minority Leader John Boehner (R- Ohio), has said. "To be more than a figurehead, Governor Locke must promise to keep politics out of the Census by keeping control of it in the Commerce Department."

If confirmed by the Senate, Locke would assume control of a large agency with a broad portfolio that includes overseeing many aspects of international trade, oceans policy and the 2010 Census.

Prompting outcry from Republicans, the administration recently took steps to assert greater control over the national head count. It has deep political implications because it is used to redraw congressional districts and distribute federal money.

"Who oversees the census won't change," White House press secretary Robert Gibbs said, adding that the director of it always reports to the Commerce secretary. "I think members of Congress and the White House both have an interest in a fair and accurate census count."

The Seattle Times story, "Locke's clout with China may have helped him land Commerce nomination," takes a different approach.

Barack Obama
Posted by Howard Martin at 6:45 AM