UPDATE: Robert Reich says it's "Only $4.2 Billion To Buy This Election? The number of dollars spent isn’t the issue; it’s the lopsidedness of where the dollars come from." 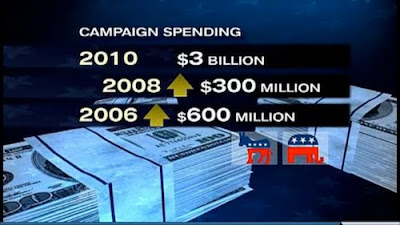 If corporate control of the state is a pillar of fascism–and it is–it’s hard to imagine what could have pushed us faster in that direction than last January’s decision by the Supreme Court in Citizens United vs. Federal Election Commission.

That decision made it possible for every corporation and fat cat from Boeing to David Koch to spend without limit to destroy any candidate they wish to destroy. If that strikes you as hyperbole, listen to what Rob Collins, the president of American Action Network, one of the leading Republican groups in this campaign season, said to Jim Rutenberg a couple of days ago in a great story in The New York Times:

“We carpet-bombed for two months in 82 races, now it’s sniper time. You’re looking at the battle field and saying, ‘Where can we marginally push — where can we close a few places out?’” MORE...