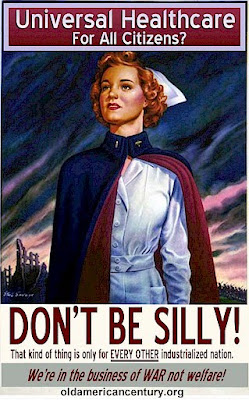 "Media still doesn't get why left is upset with Obama and Reid (John Aravosis-AMERICAblog):

From Peter Baker in today's NYT:

Of course, to many on both sides of the aisle, there is a less sympathetic narrative. To the left, Mr. Obama seems increasingly to lack the fire to fight on matters of principle.

Almost. Just drop the "on matters of principle" and you've got it right.

President Obama doesn't seem to lack the will to fight on maters of principle, rather, he seems to lack the will to fight on anything. There's a huge difference. Markos of DailyKos was on Meet the Press this morning. David Gregory asked him something about liberals being "idealistic" or something. The implication being, that this battle is between those who accept reality and those who are naive.

That is not what's going on.

The blogosphere might have been idealistic 5 or 10 years ago, when many were new to politics. But they're not new now. And some of us have been working in national politics for twenty years. Our anger is not rooted in our naivete, or our idealism. It's rooted in our realism. We know that when you fight for something in politics, you can very often win. But if you don't fight, you'll never win. We are upset at the President and the Congress because no one fought for the public option, for the President's own campaign promise. (As David Gregory rightly noted to David Axelrod during the same broadcast.)

The President and Congress never really fought for a specific plan. Sure, they made a lot of noise about wanting "reform," but the White House was never behind a real "campaign" for health care reform. They simply enabled some of the worst suspects in the Senate to come up with a "compromise," then sat back and did little while the entire process unraveled. (And mind you, what kind of a compromise do you get when the lead Democratic Senator that Obama picks to run the negotiation is dead-set against Obama's own campaign promise, and the GOP members are even worse?)

What's a campaign look like? Think GOP and Harry & Louise. Think what the Republicans did earlier this year, sending their minions to shut down the health care town meetings this past August. Think about the incessant GOP messaging on death panels, and killing granny. That's what a campaign looks like. It looks like hard-hitting messages that catch your opponents off-guard and sear your definition into the minds of the public. It is not simply sending the President to do a few speeches, and his wife to do a few Web videos. (And when a member of the opposition stands up and boorishly yells at you during your biggest speech on the topic, and the public is aghast, you don't go and change the bill in order to meet his concerns, confirming his assertion the bill was wrong, and you a liar.) A campaign is not waiting until your major promises are gone, and only then getting Vicki Kennedy to write an op ed.

"To sway Nelson, a hard-won compromise on abortion issue" (WaPo):

The Democrats wouldn't even sit in the same room.

At one end of the majority leader's office, Ben Nelson (D-Neb.), the antiabortion senator whose support was crucial to health-care legislation, huddled with White House staff in a conference room. At the other end, Sens. Barbara Boxer (D-Calif.) and Patty Murray (D-Wash.), the chamber's leading advocates of abortion rights, hunkered as far from Nelson as possible, in the office of Reid's chief of staff.

Shuttling between the two parties Friday afternoon and evening were Majority Leader Harry M. Reid (D-Nev.) and Sen. Charles E. Schumer (D-N.Y.). Desperately trying to find a compromise, Schumer put his head in his hands early Friday afternoon. "What are we going to do?" he asked Reid.

But by 10:30 p.m. Friday, a handshake deal sealed a hard-won compromise over abortion. Within minutes senators were on the phone with Obama, who was flying aboard Air Force One, having just forged his compromise with world leaders on global warming, according to senators and aides who participated in the negotiations. "We did it, Mr. President," Reid told Obama.

The deal faced an immediate assault from both ends of the abortion spectrum Saturday morning. The National Organization of Women dubbed it "cruelly over-compromised legislation" and the antiabortion Family Research Council dismissed it as a "phony compromise."

Under the new abortion provisions, states can opt out of allowing plans to cover abortion in the insurance exchanges the bill would set up. The exchanges are designed to serve individuals who lack coverage through their jobs, with most receiving federal subsidies to buy insurance. Enrollees in plans that cover abortion procedures would pay with separate checks -- one for abortion, one for any other health-care services.

This was an effort to comport with the 32-year prohibition against federal funding for abortions, but the Nelson compromise is a softening of the House language, which was written by Rep. Bart Stupak (D-Mich.). The Stupak amendment forbid any insurer in the exchange "to pay for any abortion or to cover any part of the costs of any health plan that includes coverage of abortion" -- a position that abortion rights advocates suggested would have led to many insurance providers dropping abortion coverage.

"I know this is hard for some of my colleagues to accept. And I appreciate their right to disagree. But I would not have voted for this bill without these provisions," Nelson said Saturday. With 59 members of the Democratic caucus already supporting the entire legislation, Nelson was the last holdout needed to shut down the Republican filibuster.

Some of Nelson's colleagues accused him of using the abortion issue as leverage to get a better reimbursement rate for his state under Medicaid provisions in the legislation. "You've got to compliment Ben Nelson for playing ',' " Sen. Richard Burr (R-N.C.) said.

Schumer, who spent more than 13 hours in Reid's office Friday, said the Medicaid issue was settled around lunchtime, and the final eight hours of the talks focused on the abortion language. Boxer estimated she spent seven hours in Reid's offices -- without ever once sitting in the same room, even though they were all of 25 steps apart.

Reid and Schumer kept up the "shuttle negotiation" between the leader's conference room and his top aide's office, Boxer said. Keenly aware how tense the talks were, the White House dispatched two aides who together have decades of experience in the Senate -- Jim Messina and Peter Rouse -- to work with Nelson. They relayed their intelligence to White House Chief of Staff Rahm Emanuel, who monitored the talks from a dinner in Georgetown.

Around 8 p.m., everyone took what was supposed to be a short break, but by 9:30 p.m. Nelson had not returned to Reid's office, stoking fear in the Capitol and the White House that the deal was heading south. Reid and Schumer -- who had barely eaten for the past three days of the talks -- gnawed on Christmas cookies in the leader's offices, according to Schumer.

Finally, Nelson was ready to cut the deal, no matter what the antiabortion groups said. No announcement was made because he wanted to see the final language in writing the next day. According to Schumer, he and Reid shook hands with Nelson. Then Reid walked across his office suites to find an anxious Boxer. "We have a deal," he said.

"It was a moment I'll never forget," Boxer recalled Saturday.

Nelson later joined Boxer at her end of Reid's office, greeting the Californian with a big hug.

In 1917, progressives in America began a quest to create a system to provide health insurance to all Americans. Today, almost a century later, we are poised to take a giant step toward realizing that goal. Viewed through the lens of history, this is truly an amazing accomplishment.

To earn my vote, health insurance reform must improve access to affordable health care for Minnesota families – and this bill clears that bar with room to spare. This bill does not fix all the problems with our health care system, and I will not stop working to improve the quality and lower the costs of health care for all Americans. But progressives can be proud of the Patient Protection and Affordable Care Act, and take a large measure of credit for important provisions it will codify as the law of the land.

"If the bill passes the Senate this week, there will be more chances to make changes to it before it becomes law. But if the bill dies this week, there is no second chance to vote yes. What those who care about health insurance reform need to realize is that unless we get 60 votes now, there will be no health care reform at all. Not this year, not in this Congress -- and maybe not for another generation."

"New health plan will have the same overseer as Members of Congress, but definitely not the same benefits or costs" (Joe Sudbabay-AMERICAblog)::

You'll keep hearing that the Senate bill, in lieu of a public option, has established a new program to be administered by the Office of Personnel Management (OPM), the federal entity that oversees health insurance for members of Congress, their staffs and other federal employees (the Federal Employees Health Benefits Program.) In fact, talking points from the Majority Leader's office tout that point:

Health insurers will offer national plans to Americans under the supervision of the Office of Personnel Management, the same entity that oversees health plans for Members of Congress.

Sounds good. But, don't be fooled. Yes, it's the same overseer. But, the treatment for members of Congress vs. those who need the new insurance plans will be very, very different:

Under Mr. Reid’s amendment, the federal Office of Personnel Management, which provides health benefits to federal employees, would sign contracts with insurers to offer at least two national health plans to individuals, families and small businesses. At least one contract would have to be with a nonprofit entity.

Blue Cross and Blue Shield companies could offer a single national plan. The new national plans would be separate from the program for federal employees, and premiums would be calculated separately.

Indeed, the Senate bill insures that the programs are kept separate:

The details were revealed Saturday through a "Manager's Amendment," offered by Senate Majority Leader Harry Reid, D-Nev. The amendment specifies that OPM cannot reduce the staffing or funding which currently goes toward administering FEHBP in order to meet this new responsibility. It requires OPM to maintain seperate risk pools for FEHBP and the "multi-state plans," as they're called--which means that the legislation wouldn't affect benefits or premiums for FEHBP enrollees.

Can't let the masses muck up the insurance for those who receive benefits paid for by the masses. The new plan will not only be separate, it will be unequal.

How many times do you think Mary Landrieu has ever had to call her insurance company to complain about a denial of coverage? Do you think Joe Lieberman ever had to call his insurance company to fight because the insurer wouldn't pay a bill? That never happens to them. But, none of us will get that level of service. We'll just continue paying for it.

I recently came across your blog and have been reading along. I thought I would leave my first comment. I don't know what to say except that I have enjoyed reading. Nice blog. I will keep visiting this blog very often.