Major health insurers, which decided early to support key aspects of President Barack Obama's health-care overhaul, are now picking through the Senate's version of the legislation and finding cause for concern.
Big insurers are still hoping to influence some language in the legislation before Congress sends it to the president. But one thing is clear: The initiative is poised to change their industry more than any other sector of the U.S. health-care system, with huge potential to disrupt profitability.

Cuts in government spending for Medicare Advantage, the privately run health plans for the elderly, are a major source of funding for the overhaul. And an excise tax on most insurers is set to cost the industry $70 billion over 10 years.

"We will be taking a fundamental look at our business, our business model and how we invest our capital," Ron Williams, Aetna Inc.'s chief executive, said this week.

A year ago, the industry's main trade group, America's Health Insurance Plans, decided to try to get out in front of the overhaul effort. Insurers agreed to renounce some of their most controversial practices -- such as denying coverage to applicants with pre-existing health conditions -- hoping to gain millions of new customers through mandated coverage.

That strategy helped insurers to dodge some of the proposed changes they most disliked, such as a rival government-run plan that is contained in the House-approved bill but isn't expected to survive the final legislation. The latest Senate bill also adds some teeth sought by the industry to requirements that individuals purchase insurance, and the business of providing health insurance to employees of big companies -- a bread-and-butter market for many insurers -- is largely untouched. 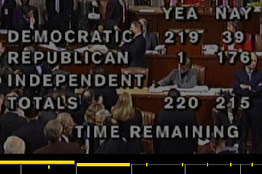 See key dates in the back and forth between Republicans and Democrats in the House and Senate.

Those victories have prompted critics to suggest that the Senate legislation has been too kind to insurers. "They knew they weren't going to get everything they wanted, but by and large they have done pretty well," said Richard Kirsch, national campaign manager at Health Care for America Now, a liberal group.

Insurance executives argue the legislation's drafters favored expanding coverage over containing costs, resulting in measures that will drive up prices.

Aetna's Mr. Williams calls "not workable" a requirement that insurers spend 80% of their individual-market premiums on medical care.

Mr. Fluegel said he had "no regrets" about the industry's strategy to offer concessions up front in an effort to shape the legislation. WellPoint is looking at how the bill will be implemented, especially because many provisions don't go into effect for several years, and the federal legislation leaves many specifics up to state regulators, he said.

AHIP Chief Executive Karen Ignagni said insurers would need to adjust to the new landscape. "There is going to be a high value placed on the coordination of care, disease management, paying for performance and being a bridge of information for consumers," she said. "Making sure they have the capacity for online sales and knowing how to present a product to consumers" will also be key, she added.

One important focus for insurers will be adding more technology to improve health and cut costs, as well as to court younger consumers who are likely to be a low-cost segment for coverage.

Humana Inc. recently launched a site called crumpleitup.com with blog posts and links to Facebook and Twitter, where it tries to reach younger consumers with health and wellness messages. Aetna is also adding resources to a student-health business it acquired.

With the overhaul expected to add coverage for some 30 million Americans, the influx of customers will be a challenge for insurers. Many with new coverage, even if they are healthy, are likely to make heavy use of the system in its early years for routine doctor visits. Customers who previously struggled to get coverage before the overhaul because of pre-existing conditions, could be very costly for insurers to cover.

Some of those newly eligible customers will flow into Medicaid, the federal-state program for the poor, which will likely see income thresholds expanded to include nine million or so new enrollees. Aetna, for one, stepped up its investment in Medicaid as early as 2007 by buying Schaller Anderson, a Medicaid managed-care company, and has since won contracts to administer programs in Connecticut and Missouri.

Big players in the Medicare Advantage market are rejiggering their businesses to boost efficiency. Universal American Corp., a large Medicare Advantage provider, has been expanding pay-for-performance plans, in the belief that compensating doctors based on outcomes, instead of volume of visits, will help bring down costs.

"I think people have listened to us," said Universal American CEO Richard Barasch. "A lot of what is talked about as cost-saving measures in the Senate bill we are doing already."

Despite the industry's mixed success in shaping the overhaul, executives are confident of coping with the changes. "We will survive, and we will figure it out," said WellPoint's Mr. Fluegel. "We're not going anywhere.">
Posted by Howard Martin at 6:17 AM