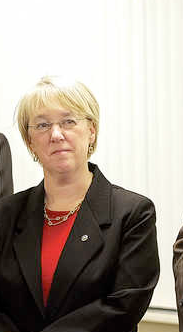 The Democrats’ final health care proposal—a compromise solution that 1) doesn’t prevent or mandate abortion coverage (there’s an opt out clause for states) and 2) technically prohibits federal dollars from paying for abortions (but not federally subsidized plans)—emerged this morning after the Democrats gave in to Sen. Ben Nelson (D-NE). Nelson sought the tighter restrictions on abortions.

Back on December 8, senate Democrats stopped a more stringent Nelson amendment to restrict funding for abortion, 54-45.

The NYT turned to Sen. Murray for her read on the abortion funding compromise:

Two of the senate’s champions of abortion rights, Senators Barbara Boxer, Democrat of California and Patty Murray, Democrat of Washington, issued a joint statement, saying they were satisfied with the agreement.

“We said all along that we wanted to ensure there was a firewall between private and public funds — this compromise achieves that,” they said. “We said we would not accept language that prohibited a woman from using her own private funds for her legal reproductive health care – this compromise meets that test.”

The abortion compromise is getting derided by pro-choice and pro-life groups alike. It gives state’s the option of prohibiting abortion coverage in government-related plans, and it technically prevents federal dollars from paying for abortions by only allowing enrollee dollars (in those federally marketed plans) to pay for abortions.

Mr. Reid’s amendment includes tighter restrictions on insurance coverage for abortions sought by Mr. Nelson. Health insurance plans would not be required or forbidden to cover abortions, but states could prohibit the coverage of abortions by plans that are offered for sale through new government-regulated marketplaces.

Under Mr. Reid’s amendment, states would have the authority to bar coverage for abortions by new government-approved health insurance plans.

A section of the bill titled “state opt-out of abortion coverage” explains how this would work: “A state may elect to prohibit abortion coverage in qualified health plans offered through an exchange in such state if such state enacts a law to provide for such prohibition.”

Some health plans receiving federal subsidies could offer coverage for abortion, but they could not use federal money to pay for the procedure. They would have to use money taken from premiums paid by subscribers and would have to keep it separate from federal money.

Sen. Murray’s full statement on the bill that emerged today—where she also says, “we end arbitrary caps on coverage. And we do it without taking away health care options for women or any other group of Americans,”—is below the fold.

The National Organization for Women also issued a statement strongly opposing the language. And in a second statement, more heated and personal, Terry O’Neill, president of NOW, said she was outraged that the Senate Democratic leadership “would cave in to Senator Ben Nelson.”

“Right-wing ideologues like Nelson and the Catholic Bishops may not understand this, but abortion is health care,” Ms. O’Neill said. “And health care reform is not true reform if it denies women coverage for the full range of reproductive health services.”

If this language stays in the bill as is, she said, she would call on senators “who consider themselves friends of women’s rights” to vote against “this cruelly over-compromised legislation.”

PubliCola has a message in to Sen. Cantwell’s office to get her statement on the abortion funding compromise
Sen. Murray’s statement:
“Today, with this bill, we are closer than ever to lowering the cost of health care for Washington state families and businesses, injecting real competition into the market to increase patient choice, and helping those without insurance get coverage for themselves and their families.

“Health care is an issue that raises passions and debate on all sides and changing our badly broken system was never going to come easy. But the indisputable fact is that if we do nothing, costs will continue to soar, families and businesses will continue to struggle under rising premiums and millions of Washington families will find their health care not in the hands of their doctors, but instead at the mercy of insurance industry executives.

“With this bill we take needed steps to change a system that has been working against Washington state families and businesses for far too long. We bring down premiums for Washington residents whose rates have skyrocketed year in and year out. We protect Medicare and lower the cost of prescription drugs for Washington seniors. We end discrimination based on pre-existing conditions, including a provision that ensures that the moment this bill is signed no insurance company will ever be able to turn away a child in our state based on a health condition. We make prevention a priority and ban insurance companies from dropping someone just because they get sick. We end arbitrary caps on coverage. And we do it without taking away health care options for women or any other group of Americans. And with a bill that the non-partisan Congressional Budget Office says will cut the deficit.“Now is the time for leadership and for doing the right thing even when it’s hard. I urge my colleagues to vote for a stronger future by passing health insurance reform now.”
Posted by Howard Martin at 10:00 AM