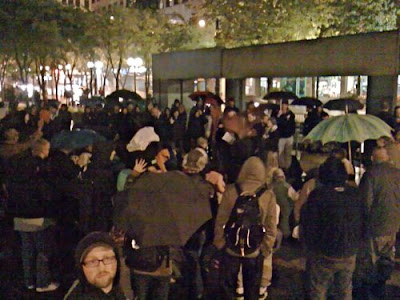 Last night, Occupy Seattle's General Assembly planned to vote on giving up its nighttime base camp at Westlake Park and moving to Seattle Central Community College.

If you've never been, the General Assembly meets every evening at 6:30 p.m. and makes all final decisions for the "collective." It operates on a system akin to Robert's Rules if Robert had, say, just ingested a pound of ecstasy. MORE...

Howie P.S.: I haven't attended a GA yet but I suspect the "pound" dosage is an exaggeration.
Posted by Howard Martin at 4:29 PM