Occupy Seattle: "Arrest a few people each night to keep the protests in check and then retreat." 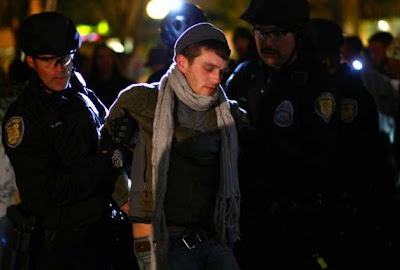 Seattle Police arrest an Occupy Seattle protester at Seattle's Westlake Park on Thursday, October 13, 2011. Ten protesters were arrested for refusing to move from a makeshift structure in the park. Earlier city officials said that people needed to clear from the park at 10 p.m. when it closes. Eventually police withdrew, causing the crowd gathered to erupt in cheers. Photo: JOSHUA TRUJILLO / SEATTLEPI.COM

UPDATE at 11:33 PM: Cops left the park without arresting the final five protesters. Seeing this as a victory, the crowd is screaming its damn head off. The legal team for Occupy Seattle believes 10 people were arrested in all. This now seems to define the city's official pattern: Arrest a few people each night to keep the protests in check and then retreat. To the extent that this keeps the occupation alive, good for the cops showing restraint and good for the protesters putting their asses on the line. But right now, some other types of protesters are walking around handing out these idiotic cards that say cops are the "tool" of the 1 Percent and that "police help banks evict people from their foreclosed homes every day." Jesus, protesters, blue-collar cops who arrest a few willing demonstrators after a two-week occupation are not the enemy. Focus. MORE...