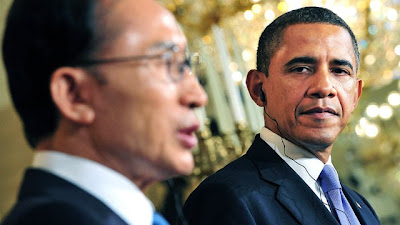 Thea Lee, deputy chief of staff at the AFL-CIO, a frequent Democratic ally, said that while the autoworkers supported the Korea deal, union worker’s concerns that trade agreements might cost them jobs may hurt Obama’s re-election prospects.

She said Obama “gave up on some of the concerns he had raised during the campaign” and the displaced worker assistance is “not an adequate tradeoff” for 159,000 jobs the group estimates could be lost to foreign competition.

“It’s something people will take into account when they decide” how actively to campaign, who to endorse and whom to vote for, she said. “A lot depends on what else he does between now and the election. The president has a lot of challenges in front of him and a lot of opportunities to do the right thing.” MORE...

Posted by Howard Martin at 5:27 AM