The Nation: "Seattle: Occupied since October 1" 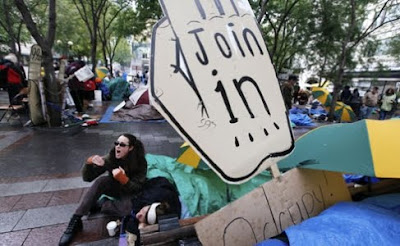 On October 1 Seattle officially joined the nationwide “Occupy” protests by marching in the city’s financial district in downtown Seattle and organizing a permanent camp in Westlake Park. According to OccupySeattle organizers, 1,500 people participated in the first demonstration and about 300 people are regularly occupying the public plaza. The movement came together after witnessing what was going on at Occupy Wall Street, says Aliana, a media spokesperson of Occupy Seattle. “We felt a connection with them,” she adds “and we are trying to convey the same message.”

The protest in Seattle has been peaceful, with few arrests in the past weeks; but things may be about to change. On October 12, Mayor Mike McGinn announced that he had instructed the Parks Department and the Seattle Police to enforce the rules at Westlake Park—no tents, camping or remaining in the park after 10 pm. Two arrests followed the same night. But just hours after the announcement, hundreds of college students from local campuses joined the protest in Westlake Park. In their speeches they were clear in saying that the Occupy movement is “the most important, grass-roots social movement in a generation.”