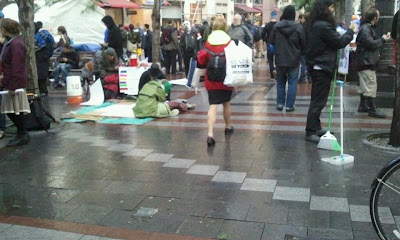 "Revel Smith: People lie to get you out. Photograph the space regularly. Occupy Seattle is a CLEAN scene ;}>"

Organizers said they'd been told to submit the list by 8 p.m. Tuesday or face eviction from Westlake Park the following morning. Because the protesters submitted the list on time, they were given another 24 hours at Westlake Park. MORE...

-- First and foremost, we demand that Mayor McGinn meet with nominated representatives of Occupy Seattle in order to discuss our long term goals.

This list of demands has been so resolved and passed by the General Assembly of Occupy Seattle this Tuesday, October 11, 2011.