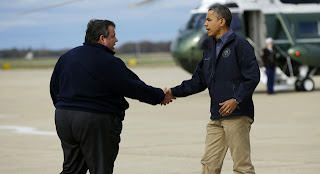 
Gov. Christie, who in past tagged President Obama as a Windy City pol without leadership skills, now gives Obama a glowing review just days before the election. The outspoken Republican whose August GOP convention address included the line that Obama is "nothing more than a Chicago ward politician," is touting the president's response to devastation in New Jersey in the wake of Hurricane Sandy. “I have to say the administration, the president himself and FEMA Administrator Craig Fugate have been outstanding with us so far. We have a great partnership with them, and I want to thank the president personally for his personal attention to this,” Christie said Tuesday on ABC’s “Good Morning America.” Christie and Obama were scheduled to visit New Jersey's hardest hit areas together on Wednesday. As I wrote in Wednesday's column, how voters view the president during the next few days (and by contrast Mitt Romney) could help decide the election next Tuesday. Even on FOX, Christie hugged Obama, saying, "I have to give the president great credit...I spoke to the president three times yesterday...he called me for the last time at midnight last night, asking what he could do.” And when FOX-casters asked if maybe Mitt would tour Jersey with him, Christie said, "I have no idea, nor am I the least bit concerned or interested...If you think right now I give a damn about presidential politics, then you don’t know me.” Love him, hate him, have no opinion or just don't care, Christie's national reputation for straight talk most of the time is, in this case, a gift to the incumbent. Cynics might say Christie (as many said of his convention speech) is more interested in pushing himself for a 2016 presidential run than doing anything to help Romney. Others will argue he's a Jersey-first leader doing all he can to help his state. Either way, right now, he's also helping Obama.

Howie P.S.: Now Brownie is saying Obama "acted too soon."
Posted by Howard Martin at 11:47 AM