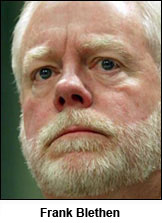 
Truth Needle: Two ads in The Seattle Times supporting Republican gubernatorial candidate Rob McKenna make several claims. Some are true, some are not. The claim: The Seattle Times has been running newspaper ads supporting Republican Rob McKenna's candidacy for governor. Two recent ads — one focused on education, the other on jobs — made a variety of claims. The education ad notes the student failure rate in K-12 schools, per-student funding and how well prepared students are for college. The jobs ad addresses the state's unemployment rate. What we found: Half true The ads are an independent-expenditure campaign by the corporate side of The Seattle Times Co., which said it is running a series of political ads as an experiment to attract more political advertising. The company said the ads were prepared by a contractor it declined to name. MORE...

Howie P.S.: Have you ever seen a news story calling out the editorial content in the same newspaper?
Posted by Howard Martin at 4:53 PM