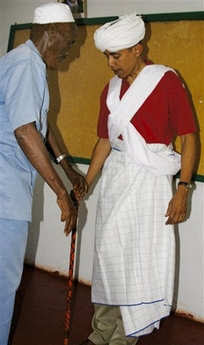 So this picture of Obama in Somali (or Kenyan) garb has everyone in a tizzy right now.

Me, I think it's kind of cool to see Obama in tribal clothing. Then again, I'm a sucker for ethnic garb, whether it's African, Latin American, Asian, Native American, Indian, Irish, Scottish, or whatever. I know, I know, respecting other cultures is soooo out of style in this country right now, but nevertheless, I think it's pretty cool.

Now the screaming headline on Drudge this morning is that, well, Obama respected another culture, and that's apparently a firing offense these days. Worse than that, Drudge claims it's the Clinton campaign that's trying to score points off Obama's tolerance.

Now I don't know when we started taking anything Drudge says at face value, but that hysteria could use a little calming down. In fact, I tend to believe the Clinton campaign when it claims that there hasn't been a campaign decision to push the, er, accusations.

“We have over 700 people on staff. I don’t know if someone on our staff sent it out or not," Elleithee said. “If someone on our staff makes the point that we are treated differently by the press than Sen. Obama, we agree with that sentiment. We don’t think there’s anything wrong with this photo. Sen. Clinton has herself, while traveling abroad, dressed in traditional, local dress. And there’s nothing divisive about that."

That part was fine, this part was just stupid:

Of course, that's not what the Obama campaign has been saying and to imply that is just eye-rolling ridiculous.

In any case, as I said a few days ago, I want to see how Obama responds to ridiculous attacks, and whether this was a Republican dirty trick or the work of a free lancing Clinton campaign operative is irrelevant. Obama's campaign has responded forcefully and with little hesitation. That bodes well for the campaign ahead.

Update: I originally wrote "Somali garb", but some think it was Kenyan.

I'll leave it hazy until I see confirmation one way or another.

Barack Obama
Posted by Howard Martin at 11:03 AM