"In Washington State Vote, Relevance Is an Issue" 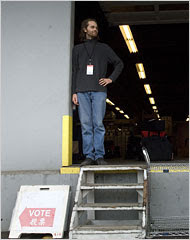 As many as 1.5 million votes are projected to be cast in Washington State’s presidential primary on Tuesday. The question is whether they will count.
The state is obliged to tally the numbers, of course, and the state Republican Party will award 19 of its 40 delegates based on the primary results. Yet Senator John McCain’s selection as the Republican nominee is pretty much assured.

More problematic is that the state Democratic Party long ago said it would award its delegates based solely on the results of the statewide caucuses that were held on Feb. 9. The party says a record 250,000 people turned out for the caucuses, which Senator Barack Obama won by 36 percentage points.

So it appears that the primary, first approved in a 1988 referendum with the goal of giving greater voice to voters who might not be able or inclined to attend a party caucus, may have the distinction of being one of the few essentially irrelevant contests in a presidential race so fierce this year that even outposts like Idaho and Alaska have nudged their way into the national spotlight for a moment or two.

The primary was moved up this year from May to February with an eye toward increasing its influence. Yet, while the presidential candidates descended on the state in the days before the caucuses, they do not appear to be coming back for the primary.

Aides to Mr. Obama and Senator Hillary Rodham Clinton have long since left the state.

Political parties have the authority to decide how they select delegates to their nominating conventions, and Democrats here have continued to rely on the caucuses even after the primary. Democratic leaders say the caucuses are well attended and help build party unity. Republicans, who have often awarded a portion of their delegates through the primary and a portion through caucuses, accuse Democrats of deliberately alienating voters from the nomination process.

“They would rather be able to do it more with the insiders,” said Sam Reed, a Republican who is secretary of state and Washington’s top election official.

“This is a $10 million taxpayer-funded meaningless beauty contest by Republican secretary of state, Sam Reed, that will pick a handful of Republican delegates at a price of about $526,000 per delegate,” Mr. Steele said.

Washington is the only state that uses caucuses and primaries to nominate delegates. Accompanying the blame and questionable relevance, there is confusion.

People here do not register to vote by party affiliation, but this year voters in the primary must check a box declaring a preferred party and sign an oath promising that they did not vote in a caucus for another party. There is no mechanism to ensure that people do so — just trust. But if a voter does not select a party and sign the oath, their vote will not be counted in the presidential primary. The changes have not gone over well.

“We’re hearing daily, in huge volumes, from voters who are angry with this style of primary,” said Bobbie Egan, a spokeswoman for the King County elections division. Ms. Egan said the department had received 50 to 75 complaints a day in recent weeks.

Mail-in ballots received so far show that 25 percent of voters in King County, the largest in the state, are not checking the box. Many are writing notes on their ballots.

“This is anti-democracy,” one voter wrote. “Political parties should not control who I can vote for.”

Still, people appear to be voting in large numbers. Almost all of Washington voters cast ballots by mail, and Mr. Reed said as many as 30 percent of voters in some counties had cast ballots more than a week before the election. He predicted that 47 percent or more of the state’s 3.2 million voters would participate, a record.

“If Hillary Clinton can come back and win the Democratic primary in the state of Washington after Obama won the caucuses, you’d better believe people will be talking about that for a long time as she looks for momentum going into Texas and Ohio,” he said.

Mrs. Clinton has fared better in primaries than caucuses. But Cathy Allen, a member of her steering committee in the state, said that other than group e-mail messages being sent to encourage supporters to vote, no great effort was under way to try to win the primary.
“There’s a loyal group of Hillary folks who are looking to show our respect,” Ms. Allen said.

Barack Obama
Posted by Howard Martin at 4:30 AM