"Clinton searches for the best message against Obama" 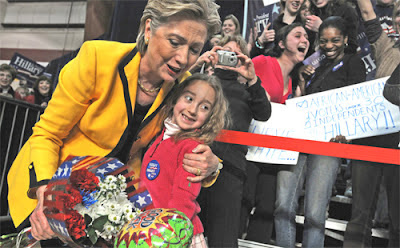 Trying to reclaim the edge, she has accused him of plagiarism, dodging debates and falsehoods in mailings.--PROVIDENCE, R.I. -- With her White House prospects in jeopardy, Hillary Rodham Clinton has shifted from one tactic to another in trying to overtake rival Barack Obama.
She tried TV ads saying he ducked debates. She accused him of plagiarism. She disparaged his huge crowds. She called his attacks on her shameful and dishonest. On Sunday, Clinton turned to ridicule.

"Now I can stand up here and say: Let's just get everybody together, let's get unified, the sky will open, the light will come down, celestial choirs will be singing, and everyone will know we should do the right thing, and the world will be perfect," Clinton told supporters here at Rhode Island College.

"Maybe I just lived a little long. But I have no illusions about how hard this is going to be," Clinton continued. "You are not going to wave a magic wand and have the special interests disappear."

Clinton's string of tactical adjustments comes amid Obama's 11-contest winning streak, which has given him the lead in delegates to the party's national convention.

"Most baffling is the inconsistency -- literally the three or four or five approaches we've seen, all within one week," said Roy Behr, a California Democratic strategist not involved in the race. "This is commonly what happens to campaigns when things are not going well."

By contrast, Obama finds himself in the enviable position of sticking with a strategy that has worked well: giving high-minded speeches to large, adoring crowds, including more than 10,000 Sunday in Toledo, Ohio, and delivering the occasional pinprick to Clinton.

On Sunday, his topic was the North American Free Trade Agreement. He accused the New York senator and former first lady of changing her stance on NAFTA once she started running for president. He suggested that she could not have it both ways.

"Sen. Clinton's premise in her candidacy throughout this campaign has been 35 years of experience, including eight years in the White House," Obama told reporters in Lorain, Ohio.

"I mean, she has essentially presented herself as co- president during the Clinton years. Every good thing that happened, she says she was a part of. And so the notion that you can selectively pick what you take credit for, and then run away from what isn't politically convenient, that doesn't make sense."

Aside from a New Hampshire debate line that some found demeaning -- "You're likable enough, Hillary" -- Obama has largely steered clear of anything suggesting a personal swipe.

"My goal is to continue to press my case for why I should be president," Obama said when asked whether he expected a contentious debate with Clinton -- their 20th -- on Tuesday night in Cleveland. "I'm not in this to tear anybody else down. I have enormous respect for Sen. Clinton."

The debate will be the pair's last before the March 4 nominating contests in Texas, Ohio, Rhode Island and Vermont. Clinton losses in Texas and Ohio would probably derail her candidacy, say many analysts -- including her husband.

At nearly every stop, she has taken credit for the expansion of children's healthcare coverage during the couple's White House years. But her pledge to fix what she describes as flaws in NAFTA has fueled the attacks from Obama.

On Sunday morning, Clinton renewed her attacks on Obama aboard a flight to Rhode Island from Washington, D.C., saying that she was offended by Obama mailings attacking her record on healthcare and NAFTA. "Raise legitimate questions, but don't engage in this kind of false and misleading advertising," she told reporters on her campaign plane.

She also denied that her angry outburst in Cincinnati about the mailings had been a calculated move, describing it instead as her spontaneous reaction after a woman showed the mailings to her on a rope line at the rally.

"Maybe we're not as careful as you think we are," she said of her campaign team.

But Clinton's efforts to tarnish Obama have steadily mounted. Describing herself as better prepared to serve as commander in chief, Clinton has belittled Obama, often without naming him.
At a Houston rally Saturday night, Clinton joked about a sign in the crowd that read, "The White House is no place for training wheels." At a Providence rally Sunday, she said: "If you were hiring a surgeon to operate on a family member, I think you'd want to know what they'd already done."

Howie P.S.: The NY Times story, "Taking Blows From All Sides and Weighing When to Punch Back," is from Obama's perspective. The WaPo's front-pager takes another angle, "Clinton Tests Out Populist Approach." Hillary is also working the air waves, as "Hillary's 'Moment' Replaying in Texas and Ohio" (WaPo's Channel '08,with video) reports. Ben Smith reports about a photo of Obama in Somali garb that has surfaced on Drudge. He claims it's from inside Hillaryland, but they aren't confirming or denying. And JedReport's recommended diary on Kos looks at the backroom connections between McCain and Clinton's top advisors.

Barack Obama
Posted by Howard Martin at 6:42 AM