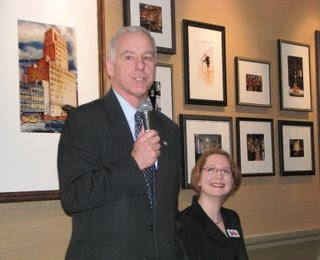 Howard Dean paid a visit in support of Darcy Burner's campaign for Washington's 8th district Congressional seat today, in a small gathering billed as "an intimate discussion of politics."
Compared to previous campaign events I've attended, "intimate" was certainly an apt description. Governor Dean was generous enough to give about an hour and a half of his time in a Q&A-focused event for about fifty supporters, moderated by Washington's state party chairman Dwight Pelz.

By way of introducing Democratic National Committee chairman and former Governor Howard Dean, Darcy spoke briefly at the beginning of the event. She laid a generous share of credit for her own entry into politics at Dean's feet, recounting how watching Dean advocate for grassroots, people-powered politics during his presidential bid, coupled with her perspective as a mother of a newborn son, propelled her into running for congress to give her son a world he could succeed in.

She also did great credit to Governor Dean by taking the time to call out Dean's tireless work to rebuild the infrastructure of the Democratic Party, through grassroots organizing, his 50 state strategy, and even prosaic party organizing tools such as VoteBuilder. All of which, she said, have been a huge benefit to her own campaign.

"Our government has been intentionally broken" by those currently in power, she said. It is up to us to fix it.

Governor Dean, when it was his turn to speak and answer questions, had his own share of bon mots:

On Senate Republicans -- "It's just crazy what these people will vote for."

On the lessons learned from the many unexpected congressional victories in 2006 -- "Two years ago the DNC wouldn't look at candidates like Darcy because they weren't 'insider' enough."

On the Bush administration's effect on 16 year olds who have never known any other president -- "What you've seen is not normal. What has been going on in the last eight years is not American."

On the Bush administration's disrespect for the constitution -- "At least Nixon knew he was doing the wrong thing. These guys are proud of it!"

While I don't want to recount every answer he had for every audience question--there were no unexpected bombshells--there is one answer that was intriguing enough to recount. When the question of impeachment came up, his answer was very much what we've heard from Congresswoman Pelosi, Senator Reid, and everyone else: it would take over the legislative agenda, there isn't enough time, etc. About what one would expect.

The intriguing part was when he followed the party-line answer with the suggestion that after Bush is out of office, America may need something like a Truth and Reconcilation Commission to investigate and address the violence done by the Bush administration to the Constitution, Bill of Rights, and the fabric of our civil society.

It was the first time I've heard anyone bring up such an idea, and to be honest I'm not sure what I think about it. Certainly the idea has an immediate appeal; if we can't have impeachment, at least we could have some formalized and authoritative recognition that Bush and his gang have been way, way out of line. At the same time it deeply saddens me that in less than two presidential terms America has been driven to a place where it needs such a thing.
What do you all think? I'd love to see some discussion of the idea in the comments.

Posted by Howard Martin at 4:06 PM