"Clinton and McCain Jab at Obama, Who Offers Details of His Jobs Program" 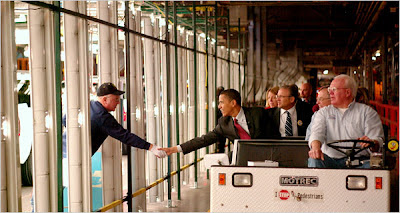 As Senators John McCain and Hillary Rodham Clinton accused Senator Barack Obama of using rhetoric that lacks specifics or fails to yield results, Mr. Obama countered on Wednesday by offering a detailed plan to spend $210 billion to create jobs in construction and environmentally friendly fields.
Mr. Obama’s sweep of Tuesday’s primaries in Maryland, Virginia and the District of Columbia, which pushed him into the lead in the count for Democratic delegates, left him very much the target of his main Democratic and Republican rivals, who have both sought to suggest that his promises of change are empty.

Mrs. Clinton, of New York, basked in cheers from crowds during a campaign swing through Texas, whose March 4 primary has become increasingly vital to her candidacy. She also contrasted what she called her “solutions” for voters’ financial struggles with what she termed the “rhetoric” of Mr. Obama, her rival for the Democratic nomination.

And half a continent away at a news conference in Washington, Mr. McCain, the presumptive Republican nominee, said Mr. Obama’s speeches had been “singularly lacking in specifics.”

Mr. Obama, of Illinois, meanwhile, opened his campaign for next week’s Wisconsin primary by presenting his plan to spur the creation of construction and environmentally friendly jobs. He made his speech inside a General Motors plant in Janesville, Wis., one day after G.M. posted a $38.7 billion loss for 2007, the largest ever for a United States auto company.

Mr. Obama seemed to allude to the criticism of his rivals who suggest that he excels at rhetoric, but falls short on details, by saying at the outset of his remarks that he was going to “take it down a notch” by giving a speech that he said would be “a little more detailed, a little longer, with not as many applause lines.”

He went on to call for a decade-long investment in a $150 billion plan to create five million so-called “green-collar” jobs to develop energy sources that are friendly to the environment. He also called for a National Infrastructure Reinvestment Bank, a $60 billion program, which he said would create two million jobs for rebuilding highways, bridges and airports.

“I’ve paid for every element of this economic agenda,” said Mr. Obama, who said the money would come from costs associated with the Iraq war and from eliminating tax breaks for corporations.

The nation’s economic woes stemmed from failures of government, he said.

“We are not standing on the brink of recession due to forces beyond our control,” Mr. Obama said. “The fallout from the housing crisis that’s cost jobs and wiped out savings was not an inevitable part of the business cycle; it was a failure of leadership and imagination in Washington.”

The Republican National Committee released what it called an “Obama Spend-O-Meter,” designed to calculate the cost of the programs he has proposed. “Barack Obama may package his economic plans with poetic rhetoric, but it’s fundamentally still the same old tax-and-spend liberal dogma,” said Alex Conant, a committee spokesman.

Mr. Obama, who has won 21 states in the Democratic presidential nominating fight, is working to add Wisconsin to his string of victories by tapping into an antiwar sentiment before that state’s primary on Tuesday. As he pointed out his opposition to the war, he linked his criticism of Mrs. Clinton with Mr. McCain as he spoke of Washington’s failures.

“It’s a Washington where politicians like John McCain and Hillary Clinton voted for a war in Iraq that should’ve never been authorized and never been waged,” Mr. Obama said. “A war that is costing us thousands of precious lives and billions of dollars a week.”

That seemed to be a debate that Mr. McCain was eager to participate in. After receiving the endorsements of the Republican leadership in the House of Representatives — another sign that the party is beginning to coalesce around Mr. McCain, despite the past differences many Republicans have had with him — he brought up the war, too, and criticized the Democrats for their views.

In aiming criticism at Mr. Obama, Mr. McCain seemed to ignore his last Republican rival, Mike Huckabee, the former Arkansas governor, who continues to give the McCain campaign headaches by doing well in nominating contests even though, as McCain’s campaign noted Wednesday, there are not enough delegates left for Mr. Huckabee to win the nomination. (It calculated that he would need to win 123 percent of the remaining delegates.)
“Of course, I would like for him to withdraw today,” Mr. McCain told reporters, referring to Mr. Huckabee. “It would be much easier.

“But I respect, and I have repeatedly said I respect, his right to continue in this race for just as long as he wants to.”

Howie P.S.: Another NY Times story, "McCain and Obama Take Their Senatorial Rivalry Into the Presidential Race," traces the two frontrunners' past history. The WaPo front-pages "Obama's Economic Plan Is A Pitch to the Working Class."

Barack Obama
Posted by Howard Martin at 4:33 AM