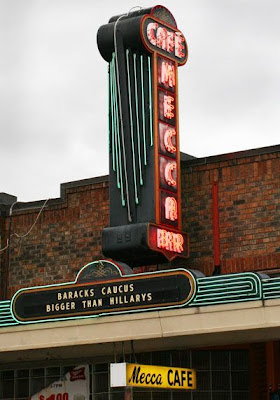 This is how a team of 16 students at the University of Washington saw Democratic and Republican caucuses around King County today. King County includes heavily-blue Seattle and the purple Eastside of Lake Washington, which includes Microsoft-dominated Redmond.
We liveblogged the Seattle-area caucuses at seattlepoliticore.org. I'm the students' prof and head of journalism at the UW. The site's content is part journalism, part pundit, part political-newbies. Altogether, the site presents these caucuses through youthful eyes.

Along the way we learned something important about the Obama and Clinton campaigns. We didn't set out to learn this -- but the campaigns taught us loud and clear. Know this when looking at the site: there is a lean toward Obama in the coverage. This occurred for three reasons:

Here's one example: Jeff Giertz, the Obama team's on-the-ground point person for the press, answered my phone call when I called to ask about press access to the Obama event Friday at Key Arena. He said he'd check on getting passes for my students. I figured I'd wait and see if he actually did. Within 5 minutes he emailed me back saying it was a go, and he could provide 4 press passes for my students. I was impressed. Clearly he had a vested interest in getting college students into the press area -- and he did what a campaign person should do: he treated us well and welcomed us to his candidate. He told me to call him anytime.

I called back 6 hours later and asked for 4 more passes. He said yes. The next day when some of my students arrived at Key Arena after the local police had locked the doors and weren't allowing anyone in, the students called Giertz and he personally came and vouched for them. He followed up today with an email checking in on how things went, from my perspective. I don't for a moment think he's doing all this just to be a nice guy; he's got motives. Of course.

Still, it's telling that I made the exact same pitch about "access to college students" to the Clinton campaign, and they didn't do anything to facilitate our coverage. When I talked to the press folks at the national office, I told them we were having trouble reaching people -- anyone -- on the ground in WA state with the Clinton campaign, and I implored them to make sure my request on behalf of my students for press access to Clinton's event Thursday night in Seattle received a response. They assured me I'd hear from them.

I'm still waiting for that call.

My point here is this: the Obama campaign's appeal to younger people is not just because of Obama himself. It's a campaign that treats young people like full adults. As a college prof, I've got to give them props. They got my attention -- and my students, and the many young people who have been reading our website. And tonight, across Washington state, Obama is crushing Clinton, 68-31 with 96% of caucus precincts reporting.

UPDATE: On the recommended list??? You just gave my students another reason to think politics and their voices aren't a waste of time. Thank you.

Here's the voice of one of my students. A couple weeks ago she wrote this. This morning she sent me these thoughts:

I noticed a difference between Obama and Clinton when I first started my
project calling their campaigns. At that point Washington state seemed like an afterthought for the Clinton campaign. Hillary wasn't anywhere to be found in Seattle, but Obama had a campaign office in the heart of Pioneer Square, a Seattle centerplace. He had for months, and everyone there seemed more than happy to help.

When I called the Clinton campaign to ask for a contact at their Washington state campaign office, one staffer tried to tell me that Washington was where their campaign headquarters is. "Yes" she said, "Washington, it's right next to Virginia."

Obama had the foresight to know he might need Washington state, whereas Clinton never thought she'd have to reach this far. And a tiny part of me felt excluded.

Every single person I've dealt with from the Obama campaign has been upbeat, positive and helpful. Even when the press couldn't initially get into the venue on Friday for Obama's speech, and a reporter from the Seattle Times was yelling at one of the volunteers, she handled it with poise and kindness. It was almost so good it looked staged, but she was real. She said, "I'm just a volunteer from Shoreline, I've never done this before, please bear with me." Even as Obama volunteers managed mobs of people at Key Arena, they did it with purpose, not burden.

And I think it's because they feel part of a movement.

John McCain spoke in Seattle to about 500 people at the Westin Hotel's conference room. Clinton spoke to a gathering of 5000 at a waterfront pier. Obama spoke at Key Arena, home to the Seattle Supersonics, it seats 18,000 and it wasn't nearly big enough. People were sitting on the stairs, in the aisles. Seasoned reporters were smiling and nodding softly as he spoke. Some people had tears in their eyes when he came on stage. There's all kinds of spin out there, but you simply can't spin those numbers. Or the stark contrast to the others in the race.

And here's the voice of another student in my class, from a comment in this diary thread:

If [the Clinton campaign] cared, they could have done more... Read my diary I wrote this morning. After covering the Obama press conference that morning, we rushed to Key Arena, but the doors were already closed. The police would not let us in, however one call to Jeff from the Obama campaign, and not only did we get in, but he personally came out and got us. Hillary's campaign didn't even give us the chance. If she care[s] about youth, she could have done something...anything...seriously, anything...

One other thing, to be fair to all in this race: there were three other campaigns that came to Seattle this past week -- all on the Republican side. Ron Paul held a rally on the UW campus. Janet Huckabee held a rally at Northwest College and her campaign team reached out to my students covering her husband's candidacy. McCain's campaign aides went out of their way to let my students know about a press event, and to get them in.

To summarize, then: 5 campaigns came to town -- and 4 reached out to my students. I applaud those that did, and scratch my head over the one that didn't.

Barack Obama
Posted by Howard Martin at 9:48 AM