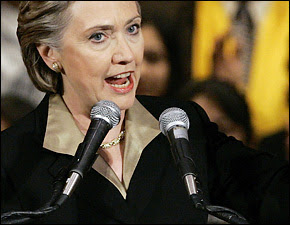 Sen. Hillary Rodham Clinton launched a tough new offensive against Sen. Barack Obama on Wednesday, asserting flatly that her rival for the Democratic presidential nomination is not prepared to serve as commander in chief.
"It is time to get real -- to get real about how we actually win this election, and get real about the challenges facing America," the senator from New York told a cheering crowd at Hunter College in Manhattan.

Resounding Obama victories on Tuesday in Wisconsin and Hawaii pushed the senator from Illinois further ahead in the delegate count and have turned the Ohio and Texas primaries on March 4 into do-or-die battles for Clinton. After 10 straight defeats, she now trails Obama in overall delegates 1,351 to 1,262, according to an Associated Press tally, and faces a dwindling number of opportunities to slow her rival's pursuit of the 2,025 delegates needed to claim the party's nomination. The first chance will come Thursday night in Austin, where the two will debate.

Clinton's 17-percentage-point loss in Wisconsin was especially crushing, a sign that her criticisms of Obama -- which were most intense during the Badger State showdown -- did little to sway voters to her camp.

But instead of shifting course, Clinton redoubled her attempt to undermine his change-oriented message. "One of us is ready to be commander in chief," she told the crowd in New York. "Let's get real. Let's get real about this election, let's get real about our future, let's get real about what it is we can do together." Obama has had a "good couple of weeks," she allowed, but said his victories had come in states that he was expected to win. Clinton predicted that when voters in Ohio and Texas have the opportunity to take his measure, his run of success will end.

Obama waved off Clinton's latest broadside, declaring before a crowd of 17,000 gathered in Dallas on Wednesday afternoon: "Today, Senator Clinton told us there is a choice in this race, and I couldn't agree with her more. But contrary to what she was saying, it's not a choice between speeches and solutions. It's a choice between the politics of divisions and distractions that did not work in South Carolina, that did not work in Wisconsin and that will not work in Texas."

In a conference call with reporters Wednesday, senior Clinton advisers vowed to press Obama on his readiness for the White House, arguing that the only reason that message has not been successful so far is that Obama was able to outspend Clinton in the recent string of contests. Now, chief strategist Mark Penn said, Clinton will draw distinctions with Obama more sharply.

"She is the only person in this race who is both ready to be commander in chief and would end the Iraq war and start to bring home troops in 60 days, compared to both Senator Obama and Senator McCain," Penn said, referring to Sen. John McCain (Ariz.), the likely Republican nominee. "She is the only one with a real plan for managing the economy, reining in the special interests and rebuilding the middle class."

He continued: "This is a very stark choice, and I think it's going to be reflected in the choice we have over the next few weeks: Who is better able to lead the country in the event of a crisis and beat the Republican nominee?"

Exit polls in Wisconsin suggested that Clinton's economic message -- a populist-tinged pledge to restore the policies of the 1990s boom -- may be falling flat. Obama held a big advantage over her among Wisconsin voters who rated the economy as their top concern. He edged her out among those naming health care, her signature issue, as the country's single biggest problem. And eight in 10 Democratic voters viewed trade deals such as the North American Free Trade Agreement, signed into law by President Bill Clinton, as job killers. Obama hammered his opponent on NAFTA in Wisconsin, reminding voters in rallies and campaign materials that she once praised the agreement.

Ceding ground on the economy could be disastrous for Clinton in working-class Ohio, which her advisers concede she must win, along with Texas, by commanding margins on March 4 to remain competitive in the race for delegates. The latest Associated Press tally showed Obama capturing most of the delegates in Wisconsin and Hawaii on Tuesday, winning at least 55 in the two states, with six still to be awarded. Clinton won at least 33, the AP found.

Obama campaign manager David Plouffe told reporters during a Wednesday conference call that for Clinton to catch up, she would have to win Ohio and Texas by 30-point margins, and follow that with a 40-point rout in Pennsylvania on April 22. "This is a wide, wide lead right now," he said. "The Clinton campaign keeps saying the race is essentially tied. That's just lunacy."

Even former president Clinton, pressing voters to turn out for his wife's campaign, acknowledged the stakes for her on March 4. "If she wins Texas and Ohio, I think she will be the nominee," he told supporters in Beaumont, Tex., according to ABC News. "If you don't deliver for her, I don't think she can be. It's all on you."

To win decisively in Ohio and Pennsylvania, Clinton must steer working-class voters back to her campaign, even as Obama continues to make inroads with them. He was endorsed Wednesday by the International Brotherhood of Teamsters, a 1.4 million-member labor union, and by the International Brotherhood of Boilermakers. That endorsement came even though Bill Clinton lobbied Teamsters President James P. Hoffa at a dinner in Washington last week.

Last week, the Obama campaign mailed two glossy fliers to Ohio voters. One targeted Clinton's health plan, noting that it would require the uninsured to buy coverage. The other showed a padlocked factory gate, noting that "only Barack Obama consistently opposed NAFTA," while asserting that Clinton had once viewed it favorably, although she is now calling for a "timeout" on trade deals to determine their impact on U.S. jobs.

In Iowa, Clinton carried herself as an authoritative front-runner advocating her "strength and experience," then shifted in New Hampshire to a quieter and more emotive candidate, chastened by defeat. When she emerged from Feb. 5 Super Tuesday contests still tied with Obama, she adopted a populist persona similar to the one employed by former rival John Edwards. In recent days, as the defeats piled up, she added ever sharper attacks on Obama's credibility.

On Monday, Clinton's campaign spokesman accused Obama of plagiarism for having borrowed lines from Massachusetts Gov. Deval L. Patrick, a close Obama friend, without attribution. And Clinton has ratcheted up questions about her rival's accomplishments and whether he has the authority to lead.

Her dismissive tone at Hunter College about Obama's winning streak reflected a mounting despair inside her campaign about whether there is anything, at this late date, that can be done to halt his rise.

In an unusual acknowledgment of Obama's recent successes, Clinton predicted a hard fight ahead. "He has had a good couple of weeks and he's run a good race, and we will be squaring off in primaries in two weeks," she said. "We're going to draw the contrasts and make the comparisons and give the people of Ohio and Texas and the other states a real choice."
Harold Ickes, a senior adviser to Clinton, said that she will close the delegate gap in the weeks ahead. "Mr. Obama is the front-runner," he said. "There will be increased scrutiny on him and his qualifications to be president."

Barack Obama
Posted by Howard Martin at 5:36 AM