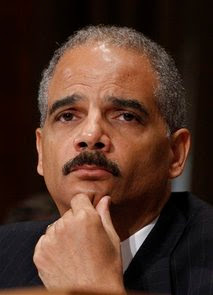 Holder is considering whether to appoint a prosecutor and will make a final decision within the next few weeks, a Justice Department official told The Associated Press. The official spoke on the condition of anonymity because he was not authorized to speak on a pending matter.
A move to appoint a criminal prosecutor is certain to stir partisan bickering that could create a distraction to President Barack Obama's efforts to push ambitious health care and energy reform.

Obama has repeatedly expressed reluctance to having a probe into alleged Bush-era abuses and resisted an effort by congressional Democrats to establish a "truth commission," saying the nation should be "looking forward and not backwards."

"We have made no decisions on investigations or prosecutions, including whether to appoint a prosecutor to conduct further inquiry," he told the AP on Saturday. "As the attorney general has made clear, it would be unfair to prosecute any official who acted in good faith based on legal guidance from the Justice Department."

Newsweek magazine, which first reported the development, said Holder was aware of the political implications of having a probe and preferred not to create unnecessary trouble for the White House. Still, the attorney general was troubled by what he learned in reports about the treatment of prisoners at the CIA's "black sites."

The probe would focus in part on whether CIA personnel tortured terrorism suspects after Sept. 11, 2001. Holder has said those who acted within the government's legal guidance will not be prosecuted, but has left open the possibility of pursuing those who went beyond the guidance and broke the law.

Holder has discussed with his staff the possibility of a prosecutor, saying he needed someone with "gravitas and grit," the magazine reported. In the end, the attorney general asked for a list of 10 candidates, five from within the Justice Department and five from outside.
"I hope that whatever decision I make would not have a negative impact on the president's agenda," Holder told Newsweek. "But that can't be a part of my decision."

Howie P.S.: Empty Wheel points the finger at Rhambo as the point person behind White House reluctance to support this investigation. Add Dick Durbin to the list of people who want a probe into CIA programs that were withheld from Congress.

Barack Obama
Posted by Howard Martin at 8:43 AM